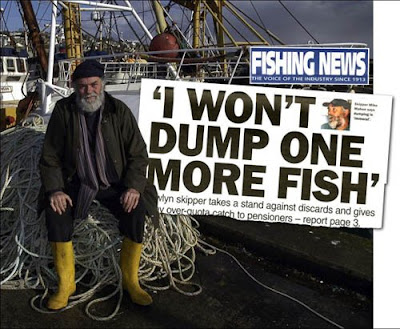 In the wake of last week's report on a "new" Tory policy on fishing, Booker has this week taken a wider look at discarding in his column.

The issues are personalised around a good friend of us both, Mick Mahon, a Newlyn fisherman who has done much to bring to light the criminal madness of the EU’s Common Fisheries Policy. And, after 25 years of living with the lunacy of the policy, Mick has had enough and has decided he will discard no more. Instead, he is "waiving the rules" and landing all the fish he catches. He gives them away to the Fishermens' mission for charity.

This has so bemused the local fisheries inspector, whose officious zeal has made him the most unpopular man in Newlyn, that his only response do far has been to threaten the mission with prosecution for accepting Mick's charitable gifts.

Of course, if every fisherman in the country did likewise, and was prepared to stand up to the tide of regulation that is progressively destroying the industry, then at least we would have a fighting chance. But, over the years, most fishermen - and especially their representatives - have sought accommodations with our provincial government, in the hope that they could continue to make a living.

This strategy has not worked and now it is left to the likes of Mick to make his defiant but ultimately forlorn gesture, his last shout before he retires from a dying industry, destroyed by the combined effects of a treacherous Ted Heath, supine MPPs (Members of the Provincial Parliament) and over-zealous officialdom.

Perhaps though, rather than Mick, the monument should be a statue of an elephant, made of glass, so that busy passers-by can ignore it completely, as indeed so many do the thing it would represent.