Down the black hole 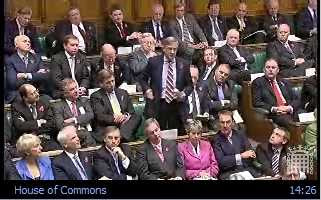 It is inevitable that, on the day following the American election, the political focus should be across the Atlantic. Like it or not, history has been made – the outcome of which is far from certain, and more than a little bit disturbing.

Nevertheless, life goes on, including the pond life in Westminster where the prattling classes gather for their weekly dose of theatre in the House of Commons, entertaining the masses for a half hour in what used to be called Prime Ministers Questions (PMQs).

Amid the high profile questions on the economy, however, it was a racing certainty that there would be a question to the prime minister on defence, with "Snatch" Land Rovers very much in the news. Not only had the lead story in The Daily Telegraph been devoted to the issue (which we discuss in detail on Defence of the Realm), but this was also the main topic of Monday's defence questions.

Now, given that this is very much a topical and important issue – having previously been the subject of acres of media comment – there was a possibility that the Great Leader might have raised it. The significance of this would have been that, in David Cameron tackling the topic, he would have sent a signal as to where Defence stands in the Conservative priorities.

Tactically, there was another reason why it would have been advantageous had Cameron taken this on board. Unlike the even lower pond life, the Great Leader gets the opportunity of coming back with supplementary questions – a privilege not afforded to lesser mortals. And given that the prepared response from the prime minister is always anodyne and formulaic, the real damage – if any - is always done on the riposte.

But, despite everything, this was not to be. The question was left to the B-team, in the persona of the shadow defence minister, Gerald Howarth (above). His exact question is detailed here (with the response), exactly the formulaic response we would expect. There could have been no other. And that was that – there was not even a hint of the Tories "hunting as a pack". The question was posed, the answer plopped out and the moment was over. It deserved better treatement.

What was quite extraordinary, however, was the response of the Conservative blog, Tory Diary, which religiously live-blogs PMQs every week, offering a running commentary and then hosting a wide-ranging post mortem in its comments section.

Howarth's question, however, came down the batting order and while the blogging took in some of the input from the lower orders, the coverage ran only 12.22 pm, when Bernard Jenkin asked a question on banks passing on rate cuts to "consumers". The blog then abruptly lost interest and Howarth's question – and the response – went unrecorded.

Small signs maybe, but when you take the general approach of the Conservatives into account, you have to conclude that defence – despite their historical interest in the subject – does not rank very highly at in the Party's priorities. Defence, like "Europe" and so many other subjects the Conservatives don't "do", has disappeared down a black hole.