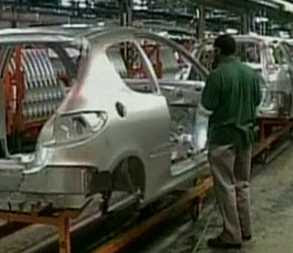 The collapse of the car industry, you would think, would have the greenies dancing with joy at the prospect of fewer of these mobile emitters being produced.

On the other hand, EU governments - which are nominally supportive of the greenie agenda – are having second thoughts about standing idly by while the industry sheds jobs by the hundred thousands. With 12 million jobs at stake and EU-wide sales down 14.5 percent in October, the EU commission has organised a €5 billion support package – mainly in soft loans – to see the industry through the worst.

Of course, such overt assistance would breach EU rules on state aid so the package is being dressed up as a measure to promote "the safety and environmental performance of cars", specifically to help them develop the technology to meet the new EU emission standard.

By 2012, new cars sold in the EU member states must average no more than 120g of C02 per km (I don't know what that is in real money) which means the average will have to be cut by about one third of the current average. And, without funding, the industry has no chance of achieving this target.

This has put the EU in a delicious position of having to confront one set of laws which will have the effect of putting the industry out of business altogether, and another set that prevent member states helping their own industries. So, trapped between a rock and a hard place of its own making, the EU does what is becoming something of a habit – it bends its own rules.

However, according to The Observer, a share of this dollop of €5 billion is not enough for the British government. With the UK industry having nosedived 23 percent in October, the sharpest drop for 17 years, the government is offering €16bn in soft loans – more than the industry has requested. Even at an EU level it is only asking for €40 billion.

The really big problem for the industry though is that lending has virtually dried up and potential customers are finding it increasingly difficult to get car loans from banks and finance companies, which means they will not be buying more cars in a hurry, no matter how "green" they get.

But the irony is that, since the loans – offered via the EIB which is underwritten by the member state taxpayers – even of we do not buy the cars we will end up paying for them anyway. Not for the first time do we see an industry partly on the rocks because of EU law, only then to have to bail it out because compliance is so hideously expensive.

But, when it comes to the greenie mantra, the polluter pays, the EU member states are suffering a collective loss of nerve – with the UK in the lead – which will eventually mean that the polluted pays. All you have to do is change one letter - doncha just love the EU?