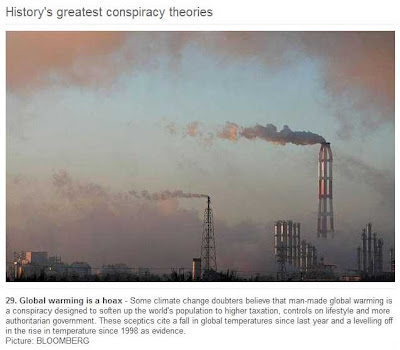 "In tough economic times, the flimsiness of the environmental movement comes to the fore," writes Melissa Clouthier for Pajamasmedia.

Environmentalism, she goes on to write, is the luxury of those without more pressing concerns - like survival. In places like China, where their government worries about feeding 1.3 billion people, environmental concerns take a back seat to human concerns like food, water, and jobs.

She is right, as far as it goes, but it applies only outside the "bubble". What she has not done is factored in the "bubble effect" of unaccountable governments and media, which have completely lost the plot.

Thus, while from inside the bubble the chatterati are tweeting today about the pre-budget report and the prospect of tax-cuts to kick-start the economy, not one of the little darlings picked up the fact that, last week the government introduced a major new tax, which is set to grow and grow and grow.

Outside that bubble, there is barely a person in the country who would willingly accept the impost of new taxes. And if, for example, the chancellor had increased the VAT on electricity, there would have uproar, with the opposition benches in full flow, waxing outrageous about "fuel poverty" and all the rest. But, because the tax is dressed up as "carbon permits", you get barely a squeak from the bubble media and absolute silence from the opposition.

As for that bubble media, the same Daily Telegraph that so earnestly in today's leader tells us that Alistair Darling "must cut tax and spending" is one of the major cheerleaders for the global warming myth that legitimises more taxation, more spending and runs entirely contrary to the ethos expressed in the op-ed by Janet Daly, who argues that it is "the whole state that needs cutting".

An example of the "bubble effect" can be seen in the paper's (online) series on "History's great conspiracy theories". Go to number 29 (pictured above) and you will read:

Global warming is a hoax - Some climate change doubters believe that man-made global warming is a conspiracy designed to soften up the world's population to higher taxation, controls on lifestyle and more authoritarian government. These sceptics cite a fall in global temperatures since last year and a levelling off in the rise in temperature since 1998 as evidence.

Deconstructing this, one sees the "straw man" technique of distorting the argument and (deliberately) confusing the issues. That the political classes are capitalising on the opportunities afforded by global warming (see "carbon permits" passim) is a perfectly valid argument but the paper turns this on its head.

From within the bubble the little darlings are able to define "climate change doubters" as those who quote evidence of "a fall in global temperatures since last year and a levelling off in the rise in temperature since 1998" as opposed to the low-grade crap produced by GISS, reported by Booker, whose piece now ranks as the "most viewed" for the entire year.

The reason this happens, of course, from within their bubble, the media has become completely detached from its readership base in exactly the same way that the political classes have become detached from their electorates. In their protected little bubble, they are still able to afford the luxury of environmentalism, heedless as they are of those irritating but more pressing concerns outside the bubble - like survival.

Only when their survival depends on ours will things change.