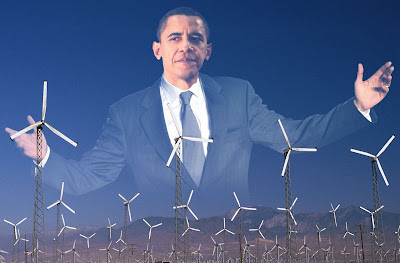 The really worrying thing about the man-made global warming cult – as Booker points out in today's column - is that it has become so pervasive that even president-elect Obama was swallowed it whole.

Anyone who starts off a statement on this issue by declaring "the science is beyond dispute and the facts are clear" is demonstrating nothing more or less than their own scientific illiteracy. Yet these were precisely the words used by Obama in a recent policy statement, delivered from the home of the greenies in California.

That the soon-to-be holder of the most powerful office in the world then proposed a policy guaranteed to inflict untold damage on his own country and many others, on the basis of claims so demonstrably fallacious that they amount to a string of self-deluding lies, is a cause of some concern.

In fact, what Obama is saying is terrifying, not least because the UN Framework Convention on Climate Change (UNFCCC) is finally owning up to the true cost of the inane attempt to reduce greenhouse-gas emissions.

In a report to be presented at the December 1-12 conference in Poznan, Poland, it updates its 2007 estimates on the costs, saying that the "investment" had to be ramped up in the coming years, reaching between $200-210 billion annually by 2030.

The problem, says UNFCCC is "higher projected capital costs," especially in the energy sector. Even then, it still has not factored in the potential bill for implementing carbon storage. This technology is still at the pilot stage, so it is not possible to come up with any reliable estimates. The only thing we can guarantee is that it will cost a fortune.

What is possibly worse still is that millions of Americans, knowing that Obama was prone to what Booker calls "post-scientific hysteria", still voted for him, despite the knowledge – available to anyone who cared to ask – that the inevitable consequence is to wreck the richest economy in the world.

This cannot be called folly – that is too mild a word. It is utter, utter madness, and one which infects the most powerful elected official in the world. That is really scary.