No end to their ambition 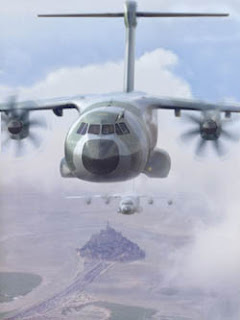 It does not really matter how much they deny it, or how many soothing words the Europhiliacs utter. Actions speak louder than words.

From the very first, before even the European Union was formally launched, there had been an attempt to launch a European Army, giving rise to the European Defence Community (EDC). And, although this attempt failed – scuppered by the French Assembly in 1954, the ambition has never gone away.

Thus we read, courtesy of the IHT the latest development aimed at bringing this ambition to fruition, with an agreement between "EU governments" to establish a joint military air squadron.

So far, Czech Republic, France, Germany, Greece, Italy, Luxembourg, Netherlands, Portugal, Romania, Slovakia and Spain have signed on to the initiative, which will be implemented by the European Defence Agency.

Notably, the UK has not signed up – although that is the way things happen. The "colleagues" set up the structure first, with us sitting on the sidelines and then, when it is fully established, we enter into a co-operation agreement and then, step-by-step we get sucked in until, in the fullness of time, British officials and politicians become the most enthusiastic supporters.

Ostensibly, this initiative is to improve the transport capabilities of the "colleagues" to far-flung operations such as Afghanistan, Africa or the Middle East. But, of course, it is not such thing. Aircraft sharing and joint-leasing could easily be arranged without going to the extent of developing full-blown squadron structure. This is all about political integration – as it has always been.

Needless to say, at the core of this capability will be the long-delayed Airbus A400M, which the IHT is still fanatasing about being ready in 2009 but, however, long it takes, the EU will wait patiently for the opportunity to adorn them with the ring of stars – the core of an emerging EU air force.

To follow is a Franco-German heavy-lift helicopter project, in which other EU member states will be encouraged to join and, with that – in slow steady stages – the EU "force" will grow.

Also, it seems, ministers have agreed that at least one of Europe's five operational aircraft carriers will be at sea at all times. These would be escorted by destroyers and frigates from various other EU nations, which would also provide refuelling and other logistics vessels. Two of those, of course, will be British carriers and, right from the very start, these have always been "pencilled in" as part of the EU's European Rapid Reaction Force (ERRF).

An independent military is, of course, a vital part of the state-building to which the EU aspires. Today, it is a little bit closer and, tomorrow, it will be closer still, drawing closer as each day passes to its ultimate ambition. Those who cannot see the shape of the end game are either blind, stupid or knaves (or all three).