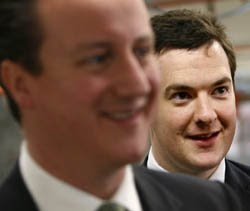 Hard though it might be to admit, Simon Heffer is being grossly unfair to the Tories (well, a little bit unfair) when he slams into them in his column today, under the headline: "Tories need to grow up to beat Gordon Brown".

He starts with the archetypal "man in pub" diagnosis of the current financial crisis, pinning – in true partisan style – all the blame on Gordon Brown, finishing his opening with this classic line: "He then failed properly to regulate those banks."

On that note alone, Jon Moulton could tell him how wrong he is and, with our analysis, it is clearly evident that Brown's failure to regulate extends only to the fact that he went along with the Basel/EU regulatory revolution which is largely responsible for magnifying this crisis and hampering our attempts to extricate ourselves from it.

But, while such subtlety is not Heffer's forte (never let facts spoil a good rant), he then does both Cameron and his shadow chancellor George Osborne a serious injustice.

This week's non-events in the Tory party, Heffer writes, "confirm my view, that they didn't seek the recall of Parliament because they had nothing to say. They couldn't bring themselves to attack the policies that exacerbated this mess because for the most part they supported them …".

He then further rounds on them, declaring, "they are not taking on the Government's handling of this crisis because they haven’t a clue what they would do differently,” then concluding: "It is not a very edifying or reassuring picture, and our democratic rights are being harmed by the Tories' inadequacy."

On that basis, he tears into George Osborne: "the shadow chancellor, isn't up to it. That becomes more apparent with each day that passes," he storms.

As it happens, though – had he bothered to look – Heffer would have found that Osborne had had something quite interesting to say in parliament. It is just that no one reported it. Specifically, he addresses the vexed issue of "mark to market", stating:

Let me turn to the issue of liquidity. The increasing reliance of our banks on the overnight money markets is creating a hair-trigger effect which leaves individual institutions more and more exposed to events. That must clearly be undone, so we all support the Bank of England's decision to extend funding to the banks from tomorrow—it should address the urgent liquidity problem—but let us be clear about what is happening here. The Bank of England is becoming not just a lender of last resort, but the lender of only resort. Does the Chancellor agree that, in the medium and the long term, that is unsustainable? We need to address not just the symptoms of the crisis but the cause, and that brings me to the issue of capital.

The cause of this crisis is that we built an economy on a debt-fuelled bubble. Now the bubble has burst, and the debt is being called in. That leaves banks under-capitalised and their balance sheets weak. There are steps that can be taken now to stop, for example, the mark-to-market accounting rules adding to a downward spiral of falling asset values and restricted lending. The Chancellor's immediate reaction when we proposed that was to say that it would make "no difference". Many, many banks disagree with him, and so do many European countries. If he will not accept our argument, will he at least engage with theirs?

This is sensible, intelligent and well-briefed. It also gets to the heart of the current problem, making points which Heffer himself could usefully have explored. But, of course, the Great Man is far too grand for that.

And neither is Osborne's boss, a certain Mr David Cameron, a slouch when it comes to exploring this problem. Apart from his speech at Birmingham, Cameron gave an intelligent and thoughtful speech in London, to a City audience last March where he explored the "pro-cyclical" effects of the Basel agreement under the heading, "capital adequacy". Like his comments in his Birmingham speech, his views went unreported.

Cameron even tried to raise the issue on the BBC's Andrew Marr programme on 27 April of this year. Cameron tells him that we have to look "at some of the causes of the problems we're in." He continues:

Marr immediately cuts him off with an interruption, reverting to an earlier line of questioning which completely changes the subject. We hear no more of Basel.

And that, in a way, illustrates the problem. BBC journalists – like their print-media brethren – seem to have a "serious" filter implanted in them. Whenever a politician says something serious or interesting, they immediately shut down. Politicians quickly learn, therefore, that if they are to attract publicity, they must pander to the journalists and indulge in the tat, the trivia and the theatre.

This is something the political blogs could have done something about, looking "round the corner" for the more profound things that politicians do say – thereby encouraging them to do it more often. Some do try but, in the main, they ape the MSM, filling their posts with the same (or slightly different) tat, trivia and theatre.

In that sense, Heffer is attacking the wrong target. When Cameron addresses the "mark to market" issue – or the "Basel" problem - he is ignored. When he rails against "bankers' bonuses", he gets the headlines.

The problem, or some of it, lies with us all as a collective. As we observed earlier, we get what we deserve. We also deserve what we get. Swatting politicians in the angry way that Heffer does is not going to make it any different.