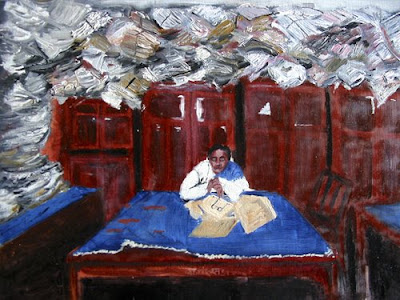 Translated, literally, this means "officials with holes in their brains". And that, we have decided, is the cause of Mad Bank Disease.

We got there eventually, and we are deadly serious. BSE is a disease – a real disease. It is pandemic in extent, having infected the regulatory systems of virtually every developed nation in the world. It is, though, most prevalent in European nations and is to be found in its most virulent form in the European Union. It threatens the very core of our civilisation and, unless checked, will destroy us.

Taking it a step at a time, it is worth looking at The Daily Telegraph leader today. It writes about the need for a "change in banking culture" in order to avoid the sort of crises we are currently experiencing. Then it adds, "But shouldn't those who failed in regulating the banking system also go?" And then it states:

The Financial Services Authority (FSA), created as part of the Labour Government's tripartite regulatory system, has been found wanting. As was the case before 1997, the Bank of England should be re-established as the banking regulator, consuming the FSA's powers.

The Bank of England, too, should seek to boost its expertise at the top: it needs a Governor with hands-on experience of banking. The aim of recapitalising banks is to boost market confidence. We need to revive confidence in regulators, too.

In principle, we would agree, but the argument is fatally flawed – flawed by the paper's lack of understanding of what is happening in the real world. It is not only a change in the banking culture we need. We also need a change in the regulatory culture.

Shifting powers back from the FSA to the Bank of England will achieve nothing. You will simply be shifting bums from one set of seats onto new seats in different offices. The rules will remain the same and the disaster will go on.

That is absolutely the core, the quintessence of the problem. We need a massive cultural shift – in fact, a reversal to where we came from, back to the culture which made us Anglo Saxons so successful. While the euro-weenies were a bickering bunch of statelets too busy squabbling and fighting each other to achieve anything, we were conquering the world.

For the purpose of definition, we can call these two philosophies, rule-based and result based. Each have very distinctive characteristics, illustrated by way of contrast.

First, rule-based regulation is based on the premise that all activity can be defined and regulated by means of detailed, tightly-drawn written rules, in order to achieve the desired result. Result-based regulation, on the other hand, recognises that human activity is so diverse and variable that it is impossible to define tight rules. This philosophy, therefore, relies on loosely drafted objectives and guidelines.

Second, rule-based regulation requires absolute conformity with the written rules – even when they are demonstrably wrong or inappropriate. "Success" is defined as conformity. Result-based regulation uses the written rules as guidelines, to be applied intelligently and flexibly, to be discarded or adapted as circumstances demand. Official rules are but one tool in a large and varied toolkit.

Third, rule-based regulation gives very little discretion to enforcement officers, and to those subject to the rules. It operates on the basis of apparatchiks applying the rulebook, who measure compliance with the rules and demand conformity with them, often backed by threats and draconian penalties.

Result-based regulation gives considerable discretion to enforcers, requiring of them a high degree of skill and judgement, asking them to assess activity in terms of whether the overall objectives set are or will be achieved. It allows a relaxed attitude to conformity with the letter of law, but requires adherence to the spirit, and thus permits considerable variation as to the means by which objectives are achieved. Penalties and punishment are regarded as a last resort, and rarely used.

In terms of this financial crisis, the old-style Bank of England was driven by a results-based philosophy. That was the foundation of its success and that is why, under its regime, no British bank collapsed for over 200 years.

Progressively though, with increasing speed, that philosophy has been replaced by the rule-based philosophy, which has spread upwards into the international system as well as downwards. It infects the United States as much as it does the UK as a member of the European Union.

It is that philosophy which spawned the Financial Services Authority, an organisation dedicated to securing conformity with an increasingly complex rule book but one which has no interest in the health of the economy or the financial system. But it is not the cause of the problem. It is a consequence of the shift in regulatory philosophy.

This is easily demonstrable. As Prof. Congdon observed, by and large, the financial services industry complied with the rules. And it went bust. It is the victim of a regulatory system that does not and could not deal with the result – the objective – of regulation, which was to maintain a sound, healthy financial system.

In adopting the rule-based system, that is where we have gone so catastrophically wrong. We need to ditch this system in its entirety and return to a results-based philosophy. The Daily Telegraph and others – including David Cameron and George Osborne – sense that, and half understand it. But they lack the depth of understanding fully to articulate the precise nature of the problem – and the peril we face.

But they must act. BSE is a killer disease. Unless we tackle it now, it will bring us all down.