This is not a game 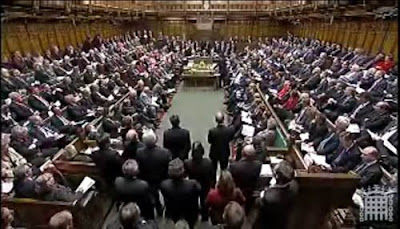 Two days in a row, we find ourselves in almost total agreement with a Daily Telegraph columnist. Yesterday, it was Heffer and today it is Iain Martin.

The target of our approval today muses on the state into which the Conservative Party has descended, observing thus:

The metropolitan elite into which the Conservatives are being sucked is not actually particularly interested in ideas, or reform, and, unfortunately, senior Tories have too often given the impression - crucially, not Cameron himself - that they have become so pragmatic that they long ago forgot what they hope to achieve by winning office.

Having an ideological compass is what matters when the water gets choppy. Unless a new government has a clear idea of what is wrong with the country and a plan to do the hard work of reform to fix it, then its ministers will be blown about and will achieve little.

There is much that needs addressing in Britain - what with flat-lining social mobility, a crushed economy and the threat to free markets - and there is little time for more frivolity. This is not a game, but this week many voters will be thinking the Tories regard it as just that.

Martin, I think, is capturing the mood of the nation, from which the Westminster chatterati, in their little bubble, seem horribly insulated. If they are not very careful, they will be like the French ancien regime who first discovered quite how unpopular they were when the tumbrels arrived at the front gate to take them to the guillotines.

The new mood is partly captured in an interesting exchange on the Tory Diary comment section, with yours truly playing away from home again. But it clearly has not percolated Iain Dale's blog, where he insists on scoring PMQs as if they were a football match.

For sure, politics does not have to be serious all the time and, as Jim Greenhalf illustrates in his latest post – with quotes from Aneurin Bevan's speech on the British invasion of Suez in 1956 - humour and irony can be deadly weapons in the right hands. If we were any good at using either, we would try them more often. A cudgel is more our style.

With due respect to Iain Dale, who does actually put in a lot of work and does occasionally produce some good material, I do wish he would stop his silly "scorecard" posts on PMQs. I know a lot of MPs hate it and squirm with embarrassment at the trivialisation of what should be a serious occasion. It does them no favours.

And if you need any reminding about how serious it all is, The Daily Telegraph today retails a report that suggests 20,000 more pensioners could die this winter as they try to cut back on heating following the sharp rise in energy prices.

We take issue with the focus entirely on the rise in energy prices. Energy costs are also inflated by the government's "Carbon emission reduction target" (CERT), the EU's emission trading scheme, the Renewables Obligation and, of course, VAT. Apart from VAT, none of these costs are declared on utility bills yet they are substantial additions, set to increase even further.

Yesterday, in PMQs, Mr Cameron called for more transparency in accounting while Lib-Dem leader Nick Clegg wept crocodile tears about fuel poverty. Yet both parties, as far as I am aware, support policies which add these costs to energy and presumably, support the idea that pensioners, dying in isolation and penury for want of being able to afford them, should be kept unaware of their existence.

Thus, as Mr Martin so rightly cautions, this is not a game. Voters are going to be in a pretty unforgiving mood if politicians – on both sides of the House – do not wake up to that simple fact.