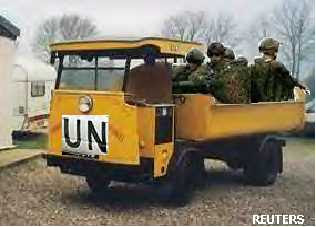 Wasn't this one the EU was supposed to have sorted out?

After their last stunning success, when they really impressed the natives, we'd better send for the European Army again.

Or perhaps it's the turn of the United Nations (pictured). Oh! Woops! It's already there.

In 2006, we were citing "analysts" who were saying that the United Nations, which had 17,500 peacekeepers in the country, "would have to act with unaccustomed resolution to prevent the run-off from spiralling out of control and returning the country to civil war." This, we said, will never happen. That means, we said, the country is almost certainly doomed to another bloody bout of civil war.

Last night, the BBC, as the situation deteriorated, the BBC was reporting correspondents saying the 17,000-strong UN force in DR Congo - the world's largest - is "stretched to breaking point".

With the United Nations Security Council in emergency session Ban Ki-moon calling for "more troops", the French Foreign Minister Bernard Kouchner said that up to 1,500 men could be deployed "in Europe's name within eight to 10 days".

No sooner said, however, than it was unsaid. After a meeting in Paris with his Australian counterpart, Kouchner admitted that EU member states had discussed a possible deployment but "a certain number of countries refused."

"It's very difficult to say what we can do outside of diplomatic efforts, efforts at persuasion, and efforts so that peace can be achieved by leaning on the two countries, the Democratic Republic of Congo and Rwanda," he added, offering no further details.

"This is really a desperate situation. Honestly, my personal attitude is to try to do something," Kouchner concluded. "I hope that the French presidency will make a proposal in the coming days."

It is all so predictable – and so very, very sad.