So nice to know he cares 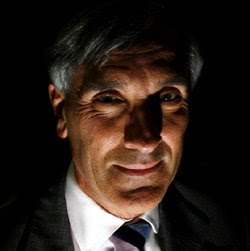 Astute readers might have noticed that John Redwood MP gave us the benefit of his advice yesterday in The Sunday Telegraph.

"We can all unite in condemning those senior bankers who expanded too much and paid themselves handsomely for the mistake," he writes. Warming to his theme, he tells us:

We need more action to stimulate the private sector, which is crashing downwards rapidly. It means working with the energy, water and transport industries to see which larger investment projects can be brought forward to provide some work for the construction industry. It means redoubling efforts to help people back into work who lose their jobs as the redundancies build up this winter. It means developing the packages designed by both main parties to ease and help company cash flow.

Mr Redwood would, of course, be quite interested in "company cash flow", and dead keen on "stimulating the private sector" - given his directorship in the investment company, Audley European Opportunities Master Fund Ltd and its feeder funds, to say nothing of his position as non-executive chairman of Evercore Pan-Asset Capital Management Ltd, an investment advisory company.

In that latter role, it is encouraging to learn that he was on the ball last July when he was writing to his clients telling them that, while oil was widely expected to go up in value over the longer term, "this trend may soon be disturbed."

"Now was the right time to sell and take profits on oil," he said. "While the long term case is apparent, commodities rarely go up continuously in a straight line, and there are now some really good profits on oil. In the short term there are reasons to worry about the downside for energy prices."

Interestingly, that was just at the time we were commenting on the recent "eye-watering increases in gas (and electricity) prices," and the prospect of people going to jail because they could not pay their energy bills.

Still, now that Mr Redwood's clients – and himself no doubt – have happily taken their "really good profits" on oil, it is good to know that Mr Redwood himself has some time to spare to do his day job – for a small fee of course, paid by The Sunday Telegraph.

Surprisingly, while the paper was quick to tell us that John Redwood is chairman of the Conservative Party's economic competitiveness commission, it somehow omitted the small details of his other paid employment.