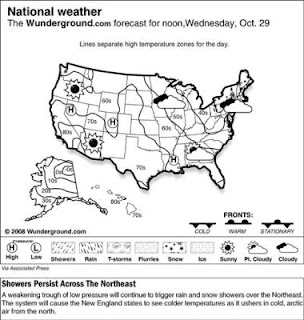 I guess you are going to get a lot of this from this blog over the winter, as we see it shaping up for an unusually cold one.

The news is that the first big snowstorm of the season in the Northeast USA shut down sections of major highways this morning and blacked out thousands of electricity customers. The National Weather Service posted a winter storm warning for parts of New York state, in effect until 8 a.m. Wednesday, and issued winter storm advisories for parts of Pennsylvania, New Jersey and Vermont.

"It looked like a mini blizzard in October," said Joe Orlando, spokesman for the New Jersey Turnpike Authority. "We're salting the roads and we haven't even gone trick or treating yet."

Up to a foot of snow was possible in parts of upstate New York, with wind blowing at 25 mph, and gusting to 40 mph, and as much as 9 inches of snow was forecast in Vermont's mountains, the weather service said. Eight inches of snow had fallen by late morning in Pennsylvania's Pocono Mountains. Schools closed or delayed their opening in parts of Pennsylvania and New York state.

And yes, we know weather is not climate, but this unseasonably cold weather has not come as a surprise to watchers of Watts up with that and other "climate sceptic" sites. The severe winter last year - which ran well into the Spring - the "quiet sun", the shifts in oceanic current patterns, the behaviour of the Arctic ice and the global temperature trend all point inexorably to one thing – it is going to be cold this winter.

I suppose watching the snow through the window will make a change from worrying about the global financial crisis, even if we have to do it in the dark, when the lights go out – as they most assuredly will if the winter really bites. But then, we can amuse ourselves spotting the rats scavenging and watching the media and the politicos squirm as they try to explain (not) that this is just a temporary break in the upwards march of global warming.

Thus, just for the fun of watching them squirm – proving once again that the consensus is invariably wrong – let it snow!