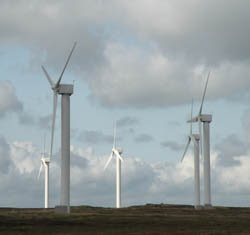 There is some very small comfort to be drawn from this financial crisis. According to The Times, it seems that a number of new subsidy wind farms are having difficulty attracting funding.

Unfortunately, the bigger schemes backed by the larger utilities are thought to be safe – for now - but, with the tightness of finance and the falling prices of fossil fuels, some of the smaller and more speculative developments are facing funding problems.

"The debt is just not there," says John Dupont, head of renewable energy finance in the UK for Nordbank, the world's largest wind energy financier. "We are still doing deals but the market is very difficult. This could result in a big delay for wind farm projects being developed in the UK."

However, this is not unalloyed good news. Given the profitability of wind power – the example we cited delivering an annual income of just short of £3 million for an investment of less than £9 million – then if these schemes are in trouble then so is the rest of the energy industry. With the ROC, wind is far more profitable than any other form of electricity generation.

No one has yet focused on the longer-term effect of the financial crisis on the energy industry's investment plans – it is probably far too early to make an assessment. But it is a racing certainty that it is going to add to costs and, if credit does become more difficult to secure, even for conventional generation, than we are in even bigger schtuck than we thought.

The one bright side here is that a recession will reduce demand for electricity, although even that will not compensate for the effects of a harsh winter, the like of which seems increasingly likely.

To add to our ever-increasing joy, The Times also reports that the completion of Europe's first pressurised nuclear reactor is to be delayed by three years. This plant is the new station in Olkiluoto, Finland, and is now unlikely to start producing electricity until 2012.

We are told that the announcement from ArevaSiemens, the French-German consortium that is building the plant, "has alarmed the UK energy industry". The reactor technology is of the same type that EDF wants to use to build four new nuclear reactors in Britain.

Although another, similar plant is being built in France - with no problems reported so far – the delays in the £1.7 billion, 1.6 GW Finnish plant will add to potential investors' nervousness.

Thus, while it is true to say, as the full saying goes – it's an ill wind that blows nobody any good – perhaps this financial crisis is indeed just that, an ill wind. This might be especially so as The Sunday Times is telling us that, just when you thought things could get no worse … they're getting worse.