And now for a break 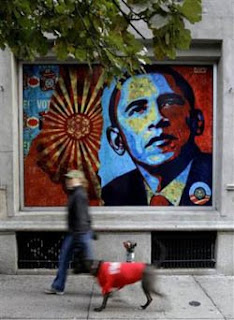 Alas, this is not a commercial break as this blog has not mastered that aspect of the problem yet. However, we need a break to have another quick look at what is going on across the Pond. The answer is nobody knows or understands.

If you get your information from the British media you may be forgiven for thinking that Barack Obama is already president and somehow you managed to miss the actual election. Actually, no. The election is on 4 November and the two candidates (plus their Veeps) are a lot closer than one realizes. In fact, the polls are all over the place. On one day last week the polls ranged from Obama being 1 point ahead (which is effectively him losing) to 14 points ahead.

State polls seem to yo-yo in a most alarming fashion and the Big Media is getting more and more hysterical. Except that some local media outlets (of greater importance in America than in Britain) have suddenly become critical of Obama and some of his statements and actions.

In other words, nobody knows or understands. So here is an interesting take on the situation by one of my favourite bloggers, The Anchoress, who points out that America is now truly post-racial and not only in the sense used by The One and his acolytes, who cry raaaaaaaaaacism every time his politics are criticized.

The Anchoress tries to deal with the question that is being asked of why Obama is not more ahead, given the many advantages he has (except for his politics, which are truly socialist):

I have no idea what any of it means, or how next week will turn out - how can anyone project anything in the face of voter "registration" fraud, whackadoo polling and an in-the-tank media?

But all of this uncertainty - all of these "narrowing" polls are proving one beautiful thing, definitively: that America actually is more post-racial than most realize. Think about it. Obama can't break 50 percent. Neither could Kerry, Gore or Clinton.

This should be cause for celebration, I think. We've clearly moved past race.