Someone doesn't read the blog 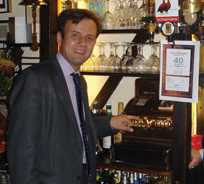 Greg Hands MP has just woken up to the (very minor) changes to the "mark to market" rules, endorsed yesterday by the International Accounting Standards Board (or IASB).

This, Mr Hands informs us, was "apparently against their better judgement", but under pressure from "various EU countries, especially Germany, France and Italy". Clearly, he is unaware that a "common position", supported by the UK, was agreed by Ecofin on 8 October, with a formal proposal to be presented by the EU commission to the European Council today, where Mr Brown will agree it.

Nevertheless, the brave Mr Hands has been in Brussels in the last two days on a select committee visit. He has, he tells us, "used the opportunity to argue with anyone who will listen that the proposed change will be entirely counter-productive." "To be fair," he adds, "I think our Government agrees with me, but doesn't seem to have the clout to prevent it, despite their own belief that they are 'leading the world' in this crisis."

I think someone would be doing Mr Hands a service if they could gently take him by one of his hands and lead him here, and then take him here.

Then they can tell him why the government does not "seem to have the clout to prevent it", and that he is wasting his time. This issue is decided by Brussels – not by the provincial parliament in Westminster. Mind you, he could also benefit from listening to his own front bench.

One has to be a little bit kind to Greg Hands. He is, after all, a new boy. But it really does remind us about MPs that, when it comes to knowing what is going on, they really are that ignorant.