Another bit of light relief 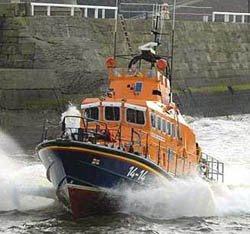 BBC Radio Scotland is retailing a tale of woe about a proposal by Ofcom to impose eye-watering cost increases for use of VHF radio frequencies.

Caught by these proposals is the RLNI which is looking at an increase from the current £38,000-a-year it pays for its VHF licence to a massive £260,000 – or £130,000 if a reduction is agreed. Other volunteer rescue groups are also being hit, including mountain rescue teams, which are being asked to write to Ofcom to object to the proposed cost rises.

Why Ofcom should suddenly take it into its head to impose such massive cost increases is, of course, not explained. This is the BBC we are talking about.

A clue is provided, however, by reference to our old and dearly beloved friend the European Union, which has now taken charge of legislation on the regulation of the radio frequency spectrum, via Directive 2002/20/EC.

This is the Directive of the European Parliament and of the Council of 7 March 2002 on the authorisation of electronic communications networks and services (authorisation directive) – just in case you are interested.

The Directive sets up a laborious system for the management of the spectrum, including a licensing system, but this cannot directly be held responsible for the fees. These are down to the national regulator, in this case Ofcom, which is responsible for implementing the EU law.

However, by reference to the full consultation document (but strangely not the abbreviate version) we find that, Ofcom – having been required to set up the laborious EU system - feels obliged, under EU law to ensure full cost recovery from spectrum users.

Like any public authority in the UK, Ofcom tells us, it is under an overriding duty to comply with EU law, on state aid or any other matter. As a result, in designing any system of public support for securing the aims of public service broadcasting – whether that takes the form of financial assistance, free or subsidised spectrum, or any other endowment of state resources – "we ensure that these are compliant with this body of law". it says.

It has thus designed what it calls the Administered Incentive Pricing (AIP) system, "on the principle that one of the best ways of ensuring that the opportunity costs of spectrum are fully and accurately reflected by decision-makers is for those opportunity costs to be reflected in prices that have to be paid to hold spectrum."

Responding to a suggestion that the system should be subsidised from the public purse – thereby reducing the enormous costs being imposed on charity groups - it declares huffily that this idea is "unworkable or not permitted under EU law," adding, "As in all our spectrum management and broadcasting decisions, Ofcom is bound to comply with all applicable EU and UK laws."

Nevertheless, Peter Bradley, RNLI's UK operations manager, is not a happy bunny. "In the current economic climate," he says, "it is going to be asking a lot of volunteer fund-raisers and the public to find that extra £100,000".

It is perhaps just as well that the volunteer fund-raisers and the public don't know why they are being asked to pay the extra – although I'm sure they would agree that this is a small price to prevent Germany going to war with France, or vice versa.