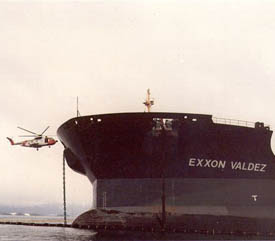 Approximately 11 million gallons of crude oil poured out of the ship in less than five hours. By August 1989, the oil had moved across nearly 10,000 square miles of water in the Sound and the Gulf of Alaska.

This was an ecological and financial disaster that cost the company $300 million in immediate compensation costs, and a $2 billion contribution to the clean-up, with a $2.5 billion law suit still pending.

Now, let us make a comparison. During the period of late September to mid-October 2008, the global banking system ran aground and ruptured in centres around the world, from New York to Iceland and London and beyond, spilling out trillions of dollars. World-wide, trillions of dollars of public money had to be spent to clean up the mess.

In the Exxon Valdex disaster, the events were raked over the coals, with innumerable inquiries, court hearings and the rest. The Captain, Joseph Jeffrey Hazelwood, was prosecuted, fined $50,000 and sentenced to 1,000 hours community service. Has never worked as a master since.

By contrast, in the Great 2008 Banking Disaster, the "tanker" has been hauled off the rocks, patched up and refilled with oil. The crew which drove the "ship" onto the rocks has been left in place and is now being allowed to have another go, with not so much as a slap on the wrist, much less an inquiry. Moreover, no one seems even to be calling for an inquiry.

If that parallel looks to be far-fetched, how else does one interpret Mervyn King's startling admission yesterday evening that, "Not since the beginning of the first world war has our banking system been so close to collapse."

Said our Mervyn, the events sparked by the collapse of US bank Lehman Brothers in September, culminating in the 37-billion-pound (64-billion-dollar, 47-billion-euro) banking bailout, were "extraordinary, almost unimaginable". Speaking to a meeting of business leaders in Leeds, he then went on to say that it was "difficult to exaggerate the severity and importance of those events".

Add to this, the comment of the editor of The Financial Times, Lionel Barber, which we recorded yesterday, when he talked of a "collective regulatory failure". His input is just one of many that speak to the same theme, a theme echoed by Professors Patrick Minford and Tim Congdon, which we picked up a week ago.

It is even one which has been acknowledged by the now embattled shadow chancellor who, at the end of last month complained that "Gordon Brown's regulatory mechanism has comprehensively failed". Discard the political rhetoric about Brown, and you have a "regulatory failure" in the frame.

Even David Cameron is singing the same tune, declaring that our "largest household debt of any major economy" was "not something we imported from America – it was down to bank lending and regulatory failure here at home".

Casting a wider net, a commentator in Australia is saying, "Government regulatory failure, not the greed of investors or speculators, is at the core of present financial problems." We even get the same refrain from Scotland with a commentator declaring, "Taxpayers' billions were being used to solve problems caused by banking avarice and regulatory failure."

To that list we can also add the multiple complaints yesterday in the US Congress about the "weaknesses in financial regulation" including, incidentally, a robust condemnation of the "mark to market" accounting system.

Now go back to yesterday and Lord Turner's comments about the need to seek "fundamental improvements" to the Basel II framework for measuring capital.

Then pick up the comments from Mario Draghi, European Central Bank Governing Council member and Financial Stability Forum Chairman. He says "that even stronger revisions may be needed to the Basel II accord regarding the amount of capital needed to be set aside by banks."

Every which way you look at it, we have the equivalent of an Exxon Valdez of the financial regulatory system, with all roads leading to Basel. So why is it that no one in the UK seems to be calling for an inquiry?

The points we made two days ago are still valid, but the only development we have had so far is a call by Michael Howard for an inquiry into the reporting by the BBC's Robert Peston of the crisis. Greg Hands MP, though, wants a full-blown Serious Fraud Office investigation.

We have had Conservative Party Treasury spokesman Philip Hammond calling for a public inquiry, but only into the FSA's oversight of AIG Financial Products in Mayfair. But at least that is something. All we have had from the Liberal Democrats is a call from Chris Huhne for a "full investigation" into the George Osborne affair.

With that affair dominating the headlines - in what is possibly of some minor significance in the narrow domain of party politics, the bigger picture has been swamped.

From the perspective here, it seems the political establishment has lost the plot, retreating into a new infantilism while the important issues go unheeded. Perhaps though, this is just too big. At the top of the regulatory midden is that shadowy organisation, the Basel Committee on Banking Supervision, the apogee of the new system of world government.

But, if no one wants to take on this committee on, when even its own chairman admits to failures, then it would seem to confirm the very worst – that our new government is totally unaccountable. It is responsible to no one.

Rather than taking the responsibility of commanding a ship, clearly it is better to be an anonymous banker on an international committee making the rules if you mess up. That way, not a hair on your head is disturbed and you glide effortlessly on, safe in your anonymity as your monthly salary cheques continue to flow.

And there is not a single politician, journalist or commentator prepared to do a thing about it. Thus are we betrayed.