A nice pot of tea 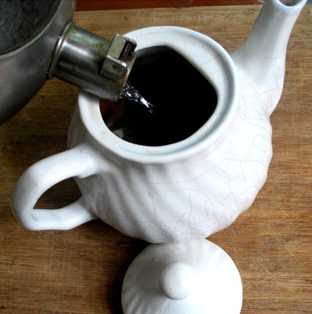 What is happening in this country – the world – today, is so awful, so enormous that it is almost too scary to think about. That is, of course, why so many people do not.

That phenomenon is a variation of this, a very natural human reaction to something which is just beyond the capability of most people to deal with.

In fact, it is more akin to the reaction of the archetypal housewife on being told that World War II had broken out, busying herself making a pot of tea. At times like this, we all retreat into our comfort zones, close our minds to the impending disaster and hope for the best.

But disaster there will be – we are already in the opening phases, and "making a pot of tea" is not going to solve it. But this is not a "sky falling in" type of disaster. That is the wrong analogy.

This is more like the "Temple of Doom" movie. We are trapped in a room, with the ceiling – complete with wicked spikes - getting lower and lower, threatening to crush us all. But every now and again, the ceiling judders to a halt in its downwards path. We breathe a sigh of relief, and hope it is all over. Then it lurches into action and the nightmare continues.

One of those "lurches" happened today, with the stock exchanges plummeting worldwide and the FTSE falling three percent today, driven by "fears of a recession".

This is in the week when Gordon Brown has been hailed as the saviour of the world, with the media yesterday full of euphoria about the corner having been turned, the "colleagues" piling in behind him with a €2 trillion "rescue" package of their own. With such a huge, co-ordinated international effort, market sentiment should have been up, not down.

Today's market movements could be viewed in that context, indicating – apart from anything else - that traders have seen the packages for what they are, smoke and mirrors.

Meanwhile, the euro-weenies and their greenie friends are still prattling on about their "climate change" agenda, with little Ed Millibean in London proclaiming that we're going for an 80 percent cut in emissions in year whatever.

These people are totally obsessed, but then "climate change" is their own comfort zone. Even after we tilt over the edge of the precipice, they will be screaming "climate changeeeeee …" as they hurtle to their doom. But this current surge is their last hurrah.

In months, if not weeks, their obsession will have slid down the agenda so far as to be invisible. In a few years time it will be a historical curiosity, with people shaking their heads in wonderment at how we could all have been so gullible as to have believed that greenie tosh.

By then, the world order will have changed. The tectonic plates are already moving, but we have no idea what shape the new world will take. That is something for future generations but the likelihood is that, in the short to medium-term, it ain't going to be pretty.

I think I'll go and make a pot of tea. It won't solve anything, but at least it'll make me feel better.