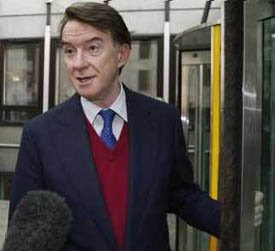 "I have had to put up with a sort of media narrative that has owed more to lifestyle journalism than economic and business analysis," Business Secretary Peter Mandelson tells the House of Commons "business" select committee. He continues:

The only thing that has been absent from this narrative is the sex, drugs and rock and roll but I've no doubt those missing elements will be rectified in the coming Sunday newspapers and I, of course, await it with baited breath.

It says something that the sustained personal attacks on Mandelson have now taken a new twist, with the Tory shadow chancellor in the frame over his meeting with Oleg Deripaska. The soap opera is now rampant and the "theatre critics" are in their element.

Of course, these issues have got absolutely nothing to do with anything which affects our daily lives, but they are the staple fare of our modern media and the blogosphere wannabes, many of whom who are quite incapable of addressing issues that require any intellectual effort or which actually matter.

There is a link between this behaviour and our earlier post. As British politicians become more and more detached from the process of government, their political activities become increasingly empty and irrelevant.

Reflecting this, the media turn to reporting on the theatre of politics rather than the substance. This should be unsurprising because, in so many areas, there simply isn't any substance - or it is too complicated for the dismal little brains of the hacks, atrophied by their constant diet of tat.

All we have left, as Mandelson puts it, is "lifestyle journalism". The trouble is that the "theatre" is so much more entertaining - and less challenging - than real life. It is this that gives it its ready audience of zombies who are quite happy to twitter and coo about the latest "revelations" instead of focusing on the people who are really screwing up our lives.