Arctic ice melting "even in winter" 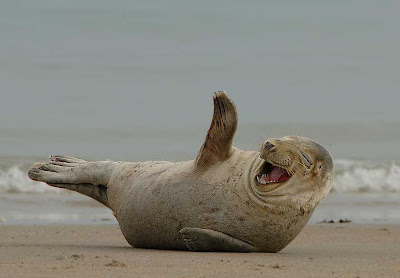 Yes, The Sunday Times did print this tosh as a headline. It even quoted Peter Wadhams, professor of ocean physics at Cambridge University, saying: "This is one of the most serious problems the world has ever faced."

This is the same Prof. Wadhams who told the Telegraph, last week: "The warmer temperatures will also take longer to dissipate, the autumn freeze will take longer, meaning thinner ice."

Booker, in this week's column has reported that the Arctic ice cover is 31 percent up on last year, while Anthony Watts reports "sea ice area approaching the edge of normal standard deviation".

But there is no end to the tosh these warmists and their fellow travellers dribble out. Two weeks ago, the girlie environment correspondent, Louise Gray was writing in The Daily Telegraph that a "Green Christmas [was] more likely than a white one".

"Christmas will be green, rather than white this year as changes in the climate mean that leaves are staying on the trees right into the winter," she drivelled. "In the 1940s traditional English trees used to shed their leaves in early November. But now they are keeping their greenery well into December."

Today, without so much as a blush, we get Richard Gray, science correspondent of The Sunday Telegraph telling us that, "Britain is experiencing its best display of autumn colours for years due to the ideal weather conditions."

Gray quotes Tony Kirkham, head of arboretum at the Royal Botanic Gardens in Kew, who says the return to more typical autumn conditions was a relief as it would allow Britain's trees a chance to recover from the strains of growing and pests during the summer. He adds: "We are experiencing a return to the traditional British autumn. Cold nights and warm days are all conducive to good autumn colour."

Yet, a couple of years ago this same Mr Kirkham was telling us that the quintessential English garden was under threat from climate change.

Gardeners had to adapt or see their plots wither and die from the effects of hotter summers and dry winters. New types of drought-resistant Mediterranean plants, restricted water use and imaginative garden design would all have to become part of the gardens of the future.

Since then, of course, we have had two of the wettest summers on record which, according to the dismal little hacks, Nick Allen and Laura Clout of The Daily Telegraph, was also down to "global warming".

Not only do these people have no brains, they have no shame either.