It tells you something … 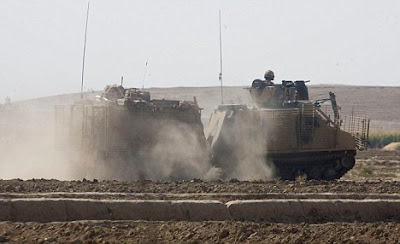 … about the modern media when yesterday's report of the announcement of a £700 million package of new armoured vehicles for the Army gets about a quarter of the space in The Daily Telegraph than a story today about "the launch of a cookery book endorsed by Gordon Ramsay which encourages the Forces to use their rations more imaginatively".

And yes, it does matter. In its own coverage of the equipment issue, The Daily Mail caustically noted: "MoD forced to shell out extra £700 million on tougher fighting vehicles after just two years." It then goes on to report that:

The Armed Forces are having to spend a massive £700million on tougher armoured vehicles for troops in Afghanistan - while withdrawing an entire fleet of state-of-the art battlefield vehicles after barely two years of use.

The £1 million Viking amphibious combat vehicle (pictured above) was hailed as a triumph when it first arrived in Helmand Province in 2006, offering unprecedented agility as it swam across rivers and charged over the most rugged terrain, even clambering over ditches and walls.

But in a sign of the increasing ferocity of the fighting against the Taliban, the Viking's armour has proved unable to protect soldiers and Marines from roadside bombs and buried mines, and at least six drivers are understood to have been killed in explosions.

Lacking as it does any institutional memory, however, it will have escaped the Mail's notice that its sister paper, the Mail on Sunday was in October 2006 uncritically applauding the arrival of the Viking in Afghanistan, as indeed did many other newspapers. This we noted in one of our recent posts.

This post, however, is not about defence issues per se. It simply uses this example to point out – once again - that the role of the media is vital to the proper functioning of our democracy, and the maintenance of good governance.

As we pointed out in that earlier post – not without a certain wry bitterness - we had seen right from the start that the Viking was dangerously unsuitable for the theatre to which it had been committed. If we could see it, then the media – with its "experts" and greater resources, to say nothing of its specialist correspondents – should have seen it as well (Some of these, actually, would have written about it but they were not given the space).

Had newspapers reported critically at the time, and then picked up on the growing toll of deaths – now estimated at least six drivers and an unknown number of personnel seriously injured, the MoD may well have sought a replacement much faster than it has. Furthermore, knowing that its choices of equipment were subject to critical – and where the need arose – hostile coverage, it might be more careful in future about the decisions it makes.

When a newspaper, however, gives more coverage to a celebrity cookery book than it does life and death issues, such as the equipment that will keep troops alive (or not), then you know there is something seriously amiss.

This is another aspect of, "Britain's infantile and degenerate political and moral culture," about which Bruno Waterfield wrote so volubly yesterday. He was referring to the Ross Brand affair but, in virtually every walk of life, the trivia, the tat and the superficial takes precedence over more serious and important issues.

Nothing, of course, should be all serious – and there is not only room but need for the lightweight and entertaining, if only as an antidote to the diet of unremitting gloom. But when this overtakes and drives out virtually all our serious news, there is genuine cause for concern.