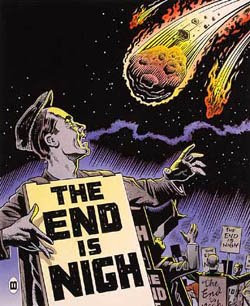 One thing I have learned – of many – is that if you are in the prediction business, you may be right in your general thrust but very often things happen much more slowly than you predict.

You can, like the man with the sandwich board, parade up and down the streets with the message, "the end is nigh," on the basis that, sooner or later, it is going to happen. And when it does, you can claim you were right. Furthermore, usually, after every cataclysmic event, someone will emerge from the woodwork claiming that they had exactly forecast what would happen. They too can claim they were right.

However, this recession is different. Any intelligent observer, we aver, could see it coming a mile off. To that effect, I looked back through our own archives and, in particular, smiled wryly at this piece:

Anyone with any political awareness and an understanding of how we are governed, and how we should be governed, cannot help but feel gloomy at the prospect. I cannot be alone in wondering quite how much longer this nation can survive under a Labour administration.

As if that is not enough, many pundits are quite seriously suggesting that 2005 will be a year of recession and some go further to predict that we could well see an economic collapse on the scale of the events that triggered the 1929 depression.

I wrote that on 1 January 2005 and, alright, I was three years early on the headline. In fact, we were not that far wrong. Much of the "real economy" has been in recession for well over a year, but Mr Brown and his merry men have messed around so much with the economic statistics that they no longer give an accurate - or any - picture of what is going on. That a recession is now headline news simply reflects the fact that "them up there" have finally noticed, or that it is so obvious that even fudging the figures cannot conceal it any longer.

That notwithstanding, we had this piece on 24 June 2005 and I was quite pleased with this piece in April 2007. This, entitled, "cartoon physics revisited", considered the cartoon convention that determined that characters which went over the cliff never started falling until they looked down and saw that there was nothing underneath them.

At the time, I distinctly recall telling anyone who would listen that we were in that position, that a collapse could occur any time. It is just that it took the world banking system until this autumn before it looked under its feet and saw nothing but thin air.

We re-visited the prospect of a global crisis many more times, but one that stands out is this on 13 March 2008 and we had also picked up on Ambrose Evans Pritchard here, earlier in the month on 3 March 2008.

Ambrose gets a lot of stick for always warning of impending doom, but his predictions have been not far wrong. The only thing you can criticise is his timing, but that is – as we have suggested – the nature of the beast.

The one we can put our finger on, as a more or less definitive piece was that one here, on 4 January 2008, when we said the economy was living on "funny money". We all know this – "everybody", it seems, except the "experts". It was dead obvious that we were heading for a fall. Randall and others were saying the same. Everybody saw it but the "experts".

It is now that these same "experts" who are telling us that this great disaster was "unexpected" – the same experts in whom we are supposed to trust to get out of this mess? That trust, as it stands, is wafer thin.

The piece I wrote yesterday, headed This is not a game, retailed Iain Martin's sentiments about the Tory party. Martin is one of the better of the paper's columnists, and his writings show that he has enough "real world" contact to be able to break out of the bubble occasionally and capture the wider mood.

I think he caught a whiff of that "real world" in yesterday's piece. Some 200 miles north of the Westminster "bubble" and the chattering elites, we here get a stronger whiff of it.

And we may be taking about social issues here – the behaviour of people – but there is an engineering parallel. If you fire up a boiler, and then weld down the safety valve, sooner or later, that boiler is going to blow. We can't say when – there is always a delayed reaction – and some of those old Victorian boilers were massively over-engineered and have a huge safety margin.

But, there is one certainty. Delayed reaction or not, it is going to blow. When it does, it will not only destroy the boiler, it will bring the whole building down with it - and half the neighbourhood. When that happens, the phalanxes of cosy, fat complacent MPs will need more than a handful of machine-gun toting police to protect them.

As Mr Martin says, this is not a game. Our gilded elites can find out the hard way, or the easy way. But, one way or another, they will find out.