With a heavy heart … 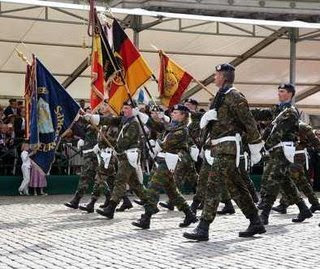 Ever since I saw it in The Sunday Times, I knew I would have to write about it. I have been putting it off, but the moment has come.

The subject, of course, is the bizarre statement by our new secretary of state for defence John Hutton who, according to the paper, has "become the first defence secretary to back a French plan for a European army, branding those who dismiss it as 'pathetic'".

Well, Mr Hutton, if that is your definition of "pathetic", then I'm pathetic, and so is most of the nation. And you will learn, my friend, that is no way to talk to the voters – not that you and your pals really give a damn.

Nile Gardiner has taken Hutton apart in Centre Right and The Daily Telegraph leader has done a pretty good job as well. There is nothing much I can add to either – just simply endorse much of what they say.

It seems we have another Hoon on our hands, who with "good old boy" General Sir Mike Jackson, did more damage to the Army and armed forces in general that can possibly be imagined. But, after thinking that the European fantasy had worked its way through the system, we seem to be back where we started – St Malo all over again, that awful sense of déja vu.

But, actually, we are not quite back where we started. Operations in Iraq are winding down and it now only a matter of time before the bulk of British forces are able to slide gracelessly out of the theatre, relieving the pressure of servicing two active theatres.

That will leave some additional resources for Afghanistan, where the military are keen to have more forces in theatre. We cannot show any enthusiasm for such a venture. Having spent a great deal of time and effort evaluating the available literature and sentiment on the conduct of the war there, we offered a detailed, if over-long and impenetrably dense analysis of how the war could be won.

We do not claim any special knowledge or insight on this. Simply, we looked at the basic principles of fighting insurgencies, the views of knowledgeable people on the ground and the conduct of operations. What we offered, however, is so far different from what is actually happening – and can happen – that we can only conclude that there is no chance whatsoever of the coalition forces prevailing in Afghanistan.

With the economy of Pakistan in the process of collapse, and the rapid political destabilisation that is occurring, we have also lost – or will lose – an essential ally in the war against the Taleban. Add to that the deteriorating economic situation, and the attraction of foreign adventures becomes even less than it is now.

One can see a situation where the coalition forces – principally the US and the UK – will go through the motions of making "one last push" in the manner of the Iraqi "surge", suppressing the insurgency sufficiently to be able to claim victory. This will be expressed in terms of our confidence in the Afghan national forces to be able to hold the ring without direct military support. That declaration will legitimise a swift coalition withdrawal, and enable homebound forces to claim a "job well done".

Of course, this will not be the case but here, as elsewhere, it will be appearances that matter. As long as the withdrawal looks credible, it will not matter what the "voices off" will say – a victory it will be. That the situation then rapidly deteriorates will be scarce reported – there is little enough reporting already – and when the Taleban, or its differently named successor, takes over, this will be nothing to do with us.

So, what has that got to do with Hutton's announcement?

Well, as we argued here and in more detail here, the European defence ambitions have nothing to do with mounting a credible defence. The European defence forces are a hollow joke, inadequate, disorganised, demoralised and useless.

What this is all about is keeping up the appearance of military might, while actually spending less on defence. And, with the economy in tatters, Mr Brown - originally lukewarm on the prospect of European defence integration - can now see the merit of it. He is heartily sick of the military anyway, and their constant whinging for more money and attention.

This way he will be able to pay less. That he will get less does not matter. European defence integration will enable him to keep up appearances, thus concealing the gradual and possibly terminal degradation of our military as an independent or even effective fighting force.

Thus, looking at the bigger picture, after the withdrawal from Iraq, we can see a brief upsurge in activity in Afghanistan. That will achieve nothing apart from getting some good men killed, and expending a great deal of munitions and wearing out equipment. The rump of our depleted forces will then be required to turn inwards, to our European partners, to maintain some façade of potency.

We will co-operate in a number of high profile but ultimately useless and ineffective military adventures alongside our European military "allies", the "successes" of which will be hyped up, way above and beyond any realistic appraisal of their value. Thus will the military settle down into some sort of half-life which will somehow justify their reduced roles and capabilities.

But, as long as the guard continues to change at Buckingham Palace on time, and our troops are not seen in public with the "ring of stars" on their uniforms, everything will seem normal enough for the media to go back to sleep and the politicians to continue their pursuit of tat and trivia.

That, with a heavy heart, is how I see the future of our once-proud military. It seems pointless, under the circumstances, to write about it – as I have done so so relentlessly on the Defence of the Realm blog - other than to record occasionally the steps in its demise.

In truth, the writing has been on the wall for a long time, and I have been deluding myself in thinking it could be otherwise. To maintain independent Armed Forces, you need an independent nation. We have long ceased to be that, which has made our military an anomaly which had to be rectified. Iraq and Afghanistan were "throwbacks". Mr Hutton will sort all that out for us.

In charting the progressive decline of our forces, the Conservatives will huff and puff and make all the right noises. But they will do nothing about the decay. You can see the way the Tory Boys are playing it. It doesn't matter how much we shout and scream at them. They know which side their bread is buttered. And that is how Cameron (or his successor) will play it – lots of noise and indignation, but no action.

We could, of course, fight the fight – continuing the losing battle. But, soon enough, we will all be fighting a different fight, one for our own personal survivals. Brown, and Major before him, with a lot of help from their tranzie friends, have not only wrecked our economy but the global economy as well. Food, shelter and basic security from the looters and thieves will become our main preoccupations.

So, when the troops come home after their victorious battles, we can go along with the charade, watch their parades and pat them on their backs for a job well done. They can hang their Regimental flags up in their museums and let the bugles play. But it's over. It was fun while it lasted. All that is left is to chart the decline.

I am cross posting this on Defence of the Realm. There, it will - most probably - be the last post. That is rather appropriate under the circumstances.