What are politicians for ... 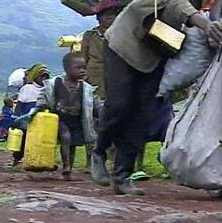 The art of statesmanship consists as much as in foreseeing as in doing.

That is not to claim any great prescience or even to claim that we were (or are), by any means, the only ones. Even on our great cause celebre, the Snatch Land Rovers, we were by no means the first to raise concerns.

What this blog does – as indeed do many others, in the blogsophere, in the media and elsewhere, is apply basic information gathering techniques and apply analytical skills and judgement. And, like many others, we come to straightforward, clear conclusions, which so often prove to be right, simply because that is what the facts are saying. It is simply a matter of joining up the dots.

Yet, as we see Mr Miliband jet off to the Congo for crisis talks, "amid intense diplomatic efforts to end the latest fighting between rebels and government forces", one gets the impression that, once again the politicians have been caught unawares.

The alarming thing is that, as ministers and functionaries, these people have vastly resources than do we, and many like us. They have experts, analysts, a myriad of civil servants, diplomats and the rest – to say nothing of huge financial resources. Yet, each and every time we get some great disaster, or problem, they seem to be surprised.

If that is the case, one really does wonder what politicians are for. If they can't do better than this, and are forever reacting to crises instead of predicting them and heading them off, we might just as well dispense with them and deal with the issues as they arise.

Perhaps if they spent a little less time pratting about over issues like Jonathan Ross – and grandstanding in general - and a little more time doing their day jobs, the world's catastrophes might come as little less of the surprises that they so often do.