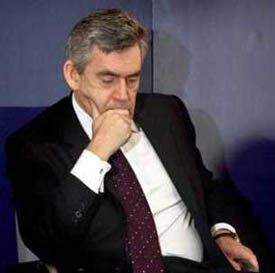 Can I be the only one to cringe inwardly when the Tory mob bays for Gordon Brown's blood?

Don't get me wrong – the man was a disaster as a chancellor and is a catastrophe as a prime minister, his "charge sheet" longer than the diary of a successful Madam.

But, to judge from this not untypical offering, he did it all by himself, unaided. It was Brown's financial management, his "lenient approach" to the City, his regulations, his "mistake" in allowing the FSA to take powers from the Bank of England, etc., etc.

More to the point, the focus on Brown to the exclusion of all else paints an almost child-like picture of the nature of government. Are we a dictatorship and is Brown so powerful and omniscient that he sits in his office in Downing Street, the levers of power at his fingertips, all-seeing and all-knowing?

Life isn't like that. Never before has government ever been so complex. Read the civics text books and they will happily tell you about the government, Whitehall, Westminster, MPs and all the rest. But it does not work that way any more.

Ask the average person how their laws are made and, I guarantee you, not one in a thousand will even get close. Ask Dr Charles Tannock how our financial laws are made. He doesn't know and he's an MEP. He doesn't even know what is in the laws he himself approved in the EU parliament, or how they came about.

Nor even does Greg Hands. And not only is he a Member of Parliament – the "proper" one – he sits on the "influential" Treasury select committee, passing judgement on the actions of our ministers and the government for their financial misdemeanours.

And, of course, we know that Dave doesn't know where our laws come from, unless he is very good at hiding it – which is very unlikely.

Probably the real reason for personalising politics though is deeply psychological. To some extent, it is vaguely comforting – in this confusing and complicated world – to believe that there is someone up there actually in control, even if it is a malign incompetent like Gordon Brown.

In particular, though, it makes the solution to all problems so very easy: just get rid of Gordon and replace him with "Dave" and all your troubles are over. "Dave will fix it", just like Jim used to on the television.

The trouble is that Dave won't fix it. He can't fix it. If he takes over the hot seat, he will no more be in control than Gordon ever was. The idea that any one man, Blofeld-like with a cat on his lap, is actually in control is strictly for the fairy tales and the James Bond films.

One can understand the attraction of this, but encouraging this excessive focus on personalities is a dangerous and short-sighted ploy. When Dave does take over – if he does – and doesn't fix it, what then? As the disillusionment sets in, who will be the next saviour?