When justice is not done 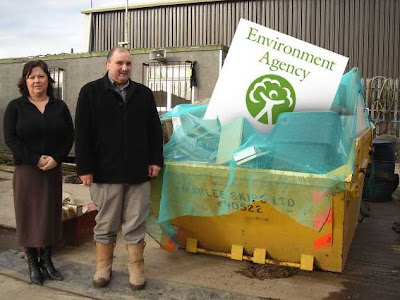 The Booker column today has a heart-warming tale. It describes how a couple, Graham and Sara Blackmore (pictured), who ran a small skip hire company in Cardiff, had been turned over by officials from the Environment Agency and, finally, having had their "day in court", had come away found innocent of all charges.

The story speaks for itself and is well worth reading on the link provided. But, what does not come over from this tale on its own – but will be apparent to regular Booker readers – is one essential feature that makes it news. That "news" is the very fact that, despite being "framed" by the Environment Agency, with a series of malicious, trumped-up charges, the couple were actually found "not guilty" in a court of law.

This is not always the case and, in a distressing number of instances, innocents are found guilty of "administrative" offences by courts which too often support "their officers" – the officials – right or wrong.

That was exactly the case with Janet Devers, featured heavily in The Sunday Telegraph today. She is, of course, the "metric martyr" who the week before last was found guilty by Hackney magistrates for offences under the Trades Description Act.

Apart from the issues involved – the sale of goods measured using the Imperial system – a review of the evidence demonstrates that the trading standards officer did not prove his case. There were major technical flaws in his evidence, in key areas he was shown to be lying and evidence was given from a number of witnesses that events the TSO claimed to have happened – which were essential to secure a conviction – simply did not take place.

On those grounds alone - without considering the general merits of the issue - the case should have been dismissed. But the Magistrates chose to believe the version of events offered by the officer – even though, under cross-examination, he had admitted they were not true – and convicted Janet. She is now to appeal.

Over time, however, we have seen many such travesties of justice, some much worse than this. One, I recall, also involved the Environment Agency, when an officer – who kept a display of the photographs of the people he had previously "nicked" in the boot of his car – decided to prosecute a poultry farmer. The charge was polluting a "controlled watercourse" with effluent from the farm.

The official's evidence was interesting. He had taken a sample of the brackish water in the bottom of the ditch. On chemical analysis, he had found traces of residues indicating "faecal contamination", which he attributed to the overflow from the farm muck heap. This was the only enterprise, in his view, which could have been the source – in a sparsely populated rural area.

There was actually no evidence of run-off from the farm and, when I had a look at it, I formed the view that it was unlikely. The muck-heap was actually some distance from the ditch and had its own barrier containment system. However, there was an emergency overflow from that system – a dry pipe which led to the ditch and could discharge into it, in the vicinity of the area where the official had sampled. It was on this basis, that the official's case rested.

Forgive the detail, but it is only from this that the full horror of the injustice that was to follow becomes apparent.

On investigating the officers evidence, it transpired that he had sampled the ditch not downstream from the emergency overflow, but a short way upstream. Rummaging around the thick undergrowth working up from the sampling point, I found another pipe discharging into the ditch. This turned out to be the overflow from a septic tank serving a residence nearby.

Now it gets really interesting. We had the technical results from the officer's sampling, demonstrating high (and quantified) levels of nitrites and phosphates, indicative of and compatible with faecal contamination. However, the ratios were wrong – say, for example, they were 10:1. When I sampled the muck-heap run-off, it had the reverse ratio – 1:10. And when we tested the septic tank overflow, it produced a ratio exactly matching the official's sample.

Thus, for the official to succeed in his case, any effluent from the muck heap – not actually demonstrated - had to have flowed upstream from the claimed discharge point and, in so doing, had to have changed completely in chemical composition.

With that we went to court, entirely confident that justice would prevail. But, as with Janet Devers, the judge – in this case – preferred to believe the evidence of the official and found the farmer guilty. He was fined a goodly sum, about £12,000 from memory, plus costs. And the official added another "scalp" to his photographic display.

I have many more such examples, but to recount them here would make this post too long. Suffice to say – a point we will reinforce when we return to this subject – that in all too many cases, justice is not done. Graham and Sara Blackmore were the "lucky" ones in that they were found not guilty on the day, even though they have suffered grievously from the officials' actions. But that is another story, no doubt one to which I will return.

We thus conclude with an observation that there are far too many cases where justice is not done for this to be a random problem. As elsewhere, there are systemic failings which need addressing.