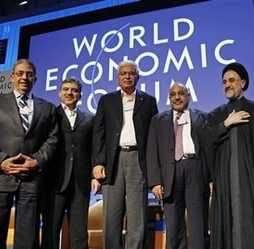 Buried in The Daily Telegraph print edition (I seem to be relying rather a lot on this newspaper these days) is a piece, apparently not replicated on-line, headed "Davos organisers express regret over 'party years'".

Definitely coming under the category, "bit f*****g late now", it tells us:

Economists from the World Economic Forum have blamed "out of control" chief executives for treating its annual Davos summits like a luxury party rather than a serious conference.

Klaus Schwab, executive chairman of the WEF, said he regretted not forcing Wall Street and City executives to listen to the worries of leading economists about the credit bubble over the last five years.

Mr Schwab is now intent of returning the conference to its intellectual roots, based on the 1944 Bretton Woods forum that discussed rebuilding the global financial systems after the Second World War.

"The partying crept in," the 70-year-old economist said. "We let it get out of control and the attention was taken away from the speed and complexity of how the world's challenges built up".

The funny thing is that the WEF meetings have acquired much the same reputation as the Bilderburger meetings – rich and famous men meeting "behind closed doors to set an agenda for the global economy".

The sad truth though is that they were little more than high-class piss-ups for a bunch of over-paid inadequates. Would that they had been "setting the agenda", instead of leaving all the work to the grey bureaucrats of Basel.

Those tumbrels are going to be really busy when the people finally cotton on to what has been going on.