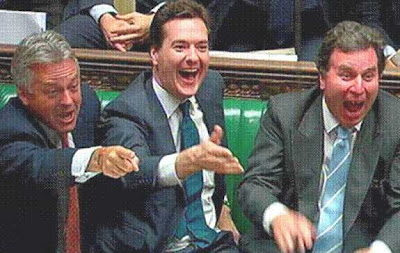 We do not always agree with Heffer – who could, especially when he launches off on one of his ill-informed "man in pub" rants? But this time, he is absolutely spot on. Bang on the button! There is hardly a word in his piece with which we could disagree.

"Members of Parliament," he writes, "receive a bad press these days and, given their performance in recent weeks, richly deserve it". He then goes on to complain, rightly and volubly, about the failure to recall Parliament during the height of the financial crisis and, more pointedly, the lack of demands by MPs to have it recalled.

Much more follows – every word should be read and savoured – Heffer’s view being that politics in Britain has ceased to be a calling and has now become a career. "With that," he concludes:

… the idea of MPs ever having the independence to do properly the job that the constitution expects of them went right out of the window. Perhaps they should stay on holiday.

I have to say that, watching on television the disgusting scenes on PMQs today, one can only agree. Speaking personally, I am sick, sick, sick to the back teeth and beyond of these idiots bickering and squabbling amongst themselves while the country goes gurgling down the plug hole. It is as if someone left open the playpen and the children have taken over the nursery.

But there is a caveat here. It is not just them, as we pointed out in an earlier piece. On the one hand, we let them get away with it but – just as importantly – on the other, when on the rare occasions MPs behave like grown-ups, we do not notice or applaud them.

Thus, it is us as a well, us as a collective, who are at fault. This is a representative democracy. In theory, our MPs hold our Executive to account and, in turn, we hold our MPs to account.

In a properly functioning democracy – if there is such a thing – this is more than just ticking a box on the ballot sheet during an election. There are still public meetings where we can make our views known and MPs hold "surgeries" where we can meet them in person. We can go to Westminster and lobby them personally and we can – under strict license these days – demonstrate outside the Houses of Parliament.

Some of us are in that "gilded circle" – some circles bigger than others, or more exclusive - where we meet MPs socially, or on business. There, we can make our views known to them, perhaps over dinner or under the blazing sun in a Paris restaurant, consuming a delicious steak (did you really think I went to Paris just to take pictures of toys?).

More prosaically, we write letters to them and - these days - send e-mails. We comment on their activities in the local and national press, in the letters columns, and by putting up comments on the online editions of newspaper articles and leaders. For a fortunate few, we have direct access – or access one step removed - to the media and are able to pen our thoughts more directly.

We also have more modern means of expressing our approval (and disapproval). We have blogs, their comments section, and the forums. Some of these are picked up by the MSM and retailed onwards to a wider audience. In short, there have never been so many opportunities for us to make our views known to our MPs.

Thus, while Heffer quite rightly rails against MPs for rolling over and looking after their own interests, we are not without blame. As a matter of constitutional fact, Parliament is sovereign in its own House. If the Executive runs roughshod over its rights, it is because Parliament permits it. Equally, if MPs as part of that collective fail to do their jobs and allow this to happen, it is because we permit it.

The uncomfortable truth of this, therefore, it that a great deal of the responsibility for the present state of affairs lies with us ourselves. Democracy, I wail, is not a spectator sport, but just because I am a lone voice in a tiny corner of the blogosphere does not make me wrong (and neither does it make me right – but that is another story).

But, while it is quite evident that the political system has gone off the rails – with endless discourse about apathy and disillusionment with politics – amongst the chatterati what have we seen?

Apart from a pedestrian and tardy contribution from Greg Hands on Centre Right on the lack of a Parliamentary debate over Brown's rescue plan, where has been the clamour on the blogosphere for that debate - for greater Parliamentary involvement? Apart from this blog, where have been the expressions of outrage amongst the political bloggers and those who so freely rush in to add their endless prattle in the comments sections?

Of course, this is so much rhetoric. We know the answer. Such "clamour" as there has been has been muted. The chatterati would much rather indulge themselves in their diet of trivia, tat and theatre than get down to the hard, gritty brass tacks of who runs this country and whether they are doing a good job.

Thus, as we have so often observed on this blog, we – the collective – have only ourselves to blame. And blame there must be – uncomfortable though it might be. For myself, in reproducing the photograph above, I am drawing attention to what was for me a turning point when the event recorded happened, almost two years ago to the day.

One should not draw too much from one photograph but the picture of those three, posturing, grinning buffoons was the last straw. It demonstrated to me with utmost clarity why the Conservatives are not fit for government.

Our problem – and tragedy – is that neither is the "government" fit for government. That goes without saying. The children have indeed broken out of the playpen and taken over the nursery. We have, therefore, Hobson's choice between one set of incompetents and another.

However, we do not have to accept this choice. If we are still a democracy – and in any event – we have the tools to make our voices heard. It is about time that we used them, properly and to effect. The message is simple and direct, to which we alluded earlier. Do the job for which you are paid - or we will find people who can.