A flight from reality 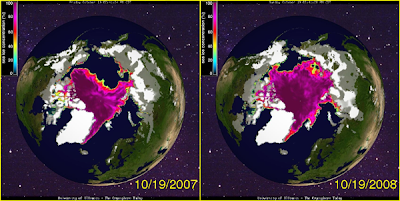 A perfectly reasonable question, some might think, is WTF does The Daily Telegraph think it is playing at? Since when has it been the marketing arm of the World Wildlife Fund (WWF)?

The question arises from a succession of "puffs" in the paper for that organisation – remember the polar bears? – culminating in today's bizarre piece which is pure, Goebbelesque propaganda on behalf of the climate change industry.

Headed, "Climate change is 'faster and more extreme' than feared," by Paul Eccleston, the article sports satellite photographs showing the ice melt in 1979 and 2007, then regaling us with details of a "bleak report" from the WWF which warns of "extreme weather events" and predicts "crops (sic) failures and the collapse of eco systems on both land and sea."

Only last week we had similar tosh from The Telegraph when it retailed uncritically the utterly mad drivelling of Professor Peter Wadhams, professor of ocean physics at Cambridge University and head of the Polar Physics Group.

This mad professor is telling us that the air temperature on the Arctic coastline would normally be 0ºC but this year and last year a larger area of water - where summer ice had disappeared - had led to a rise.

He goes on to tells us, courtesy of the drooling Telegraph "This temperature anomaly has also extended 1,000 kilometres inland towards the coasts of Alaska and Siberia and is causing the permafrost to melt and methane stored in it to leak." And then we get the absolute classic:

The warmer temperatures will also take longer to dissipate, the autumn freeze will take longer, meaning thinner ice. There is always a fluctuation in the thickness of the ice year on year and the loss this year wasn't as extreme as last year - but it was almost.

Turn to the satellite pictures from Cryosphere Today (pictured above) for a comparison of the Arctic ice cover – this year and the same time last year – and what do we see? Anthony Watts puts it in words, telling us that we have an increase in ice area 31.3 percent over last year. And the latest Arctic "record warmth claims", he tells us, are "pseudoscience".

And pseudoscience is exactly what we get from The Telegraph today, the hacks not even reading yesterday's Booker column, where he asks: "Has there ever been such a flight from reality in the history of the world?"

Clearly not, is the answer. Certainly, as far as The Telegraph goes – gripped by the "climate change" fantasy – it has little more value than a comic.