They live on a different planet … 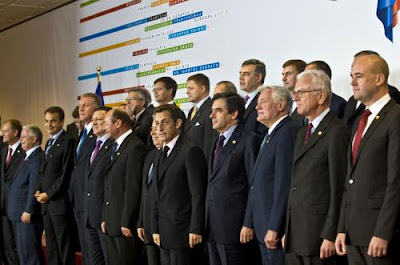 But then, so do the chatterati live on a different planet. But it is a wholly separate planet, and there's no cross-over and no communication. The two planets don't even recognise each other's existence.

The stalwart Conservative Home, on the other hand, is trapped in the Westminster bubble. It was reporting on a lacklustre Prime Minister's Questions.

Why lacklustre? Because Gordon Brown was in Brussels talking to the head of our government – or one of them … this is a multi-headed monster. And that was and is much more important than being held to account by a bunch of fractious and largely irrelevant MPs.

Oddly enough, it was an MEP who yesterday pointed out their irrelevance. This was Nirj Deva and he wrote in The Daily Telegraph thus:

The Government elected in 2005 had no manifesto commitment to nationalise insolvent banks, or socialise the capital markets' losses. Yet this was done without a vote in Parliament. How can this be constitutional or democratic? What recourse has the British citizen to protect his historic liberties?

As we pointed out earlier though, parliamentary approval was not needed. However, the approval of the EU commission was. And, as we now learn, it imposed substantial conditions before giving that approval.

HEY PEOPLE!!! The banks get a "£600 billion bail-out". Parliament is not consulted, there is no vote, but the British government has to get approval from the EU commission. And this is not important enough to mention?

Now re-read the twaddle from Charles Moore on Saturday, the man who thinks we are still a sovereign nation and can do what we like because we haven't joined the euro.

Add to that Greg Hands, an MP who yesterday complained about an international body endorsing a change to the "mark to market" accountancy rules. He was completely unaware that it had been already adopted by the EU finance ministers the previous week, lamenting that the government "doesn't seem to have the clout to prevent it."

Our government had already agreed it and he hadn't even noticed. Duh!

Take any number of examples on this blog of the "elephant in the room", stir well and look at the press coverage of this Council in Brussels. To a man – and occasional woman, the media report it as a "summit". It is no more a summit than is a meeting of the British Cabinet. The European Council is part of our government. Brown is part of that government. Yesterday he was reporting to it rather than to his own parliament, leaving Harriet Harman in charge.

While Brown is in Brussels, he will stitch up the next phase of the EU-approved "rescue" package – that will have well and truly bombed by Friday, if it lasts that long. And, to guard against our economy withstanding even that shock, he will do a deal on "climate change" which will drive it into the Stone Age.

But, yesterday, we had the theatre, typified by the "family photograph" (above). The thousands of journalists, staff and hangers-on attending the event are lapping it up and issuing breathless but essentially meaningless stories. They tell us what the European Council wants us to hear. The rest of the business – the real business – is done behind closed doors. It will be for the historians to find out what really went on.

But, as long as the media buys the "theatre", twittering about the "summit" rather than the European Council, there will never be any intelligent reporting or discussion about our new government.

Not only is the media on another planet, that planet is in a different galaxy.