Some observations on regulation 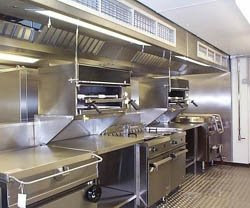 I used to work for a Casino operator in London. I won't say which one, but it was good fun and good money.

My job was food hygiene advisor, a subject that the management took very seriously. Through a twist in the Gaming Act, the local authorities had found that, if the kitchens were not up to par, they could close down the whole operation. That was big money. It was the easiest job I ever had. In the catering operations, my word was law. Anything I said was needed, we got.

Anyhow, we had a problem. The company had leased a floor in a prestige London hotel to covert into a casino. That involved major and expensive structural works and, obviously, the gaming side took precedence. For the catering, we were given part of what had been one of the hotel corridors, blocked off at one end and equipped, ship's galley style.

It was perfectly functional and I OK’d it. In fact, I liked it. I've never gone for these big kitchens – the less space you have, the less you have to clean and the easier they are to work.

All went well until the local authority inspected. The kitchen was too small, they said. They only thing they would allow us was a sandwich and snack operation – no prime cooking or food prep. We pleaded with them, but they would not budge.

Now that was bad news – seriously bad news. In the business, a Casino lives or dies by its food operation. Gaming is regulated to within an inch of its life so the only competitive advantage we had was the food. I'll let you into a little secret. If you want the best food in London – and the cheapest – forget the "big name" restaurants. Join a casino. Don't use the tables – that's a mug's game … but use the restaurants.

Now, without a food operation, we were dead in the water. When a high roller, who might spend £5 million or more on a table in one night, asks for something to eat, he gets it … anything he wants. Or he goes elsewhere. We had to have that kitchen.

Structurally, there were no options. So yours truly came up with an idea. I told you it was fun. Unlike the classic kitchen (pictured) we put all the equipment on wheels – the gas cookers on flexi-hoses with bayonet couplings, etc. That way, everything was mobile. I usually rigged my kitchens like that anyway – they were so much easier to clean.

As it happens, we had a satellite food operation, and our own, radio controlled delivery trucks, conveniently equipped with tail-lifts. And so the plot was hatched.

We equipped the kitchen and ran a full food service. But, when the inspector came to call, we activated "plan A". Being a casino, security was very tight and the inspector had to come to the front door. Then we had to put out a call for an escort. Of course, that took a little time to arrange.

By the time the inspector got to the kitchen, we had called up one of our vans, wheeled all the equipment out the back, loaded it up and sent the van to drive round London for an hour. When the inspector had gone, we got the van back re-fitted the kit and went back to work. We were happy, the inspector was happy, the customers were happy. And my boss was very happy. I got a good bonus that year.

That is the point about regulation – be it food safety or financial services. There has never been a regulation invented yet that there isn't a way round – if there's enough money in it. The tighter the regulations, the more inventive and creative will be the ways of getting round them.

And that is what has been happening in the financial services industry. Invariably, the regulators are on the back foot. The faster they write new laws, the faster the "wide boys" find ways round them. The regulators can never catch up.

The problem is that the regulatory paradigm is wrong. The authorities, from Basel to Brussels to London, are all labouring under the illusion that, if you tie the industry up in ever-more detailed rules and procedures, with check-lists, tick boxes and "compliance officers" everything will be hunky dory. It won't – it never will be.

The old hands knew how to do it, but they've been sidelined, replaced by the wiz-kids, the mathematicians, the theoreticians and the bureaucrats. And the industry is running rings round them. But then, as Warren Buffett observed, it is very hard to teach new dogs old tricks.

These buffoons don't know the half of it and, the trouble is, they are so up themselves, they are quite incapable of learning. We could say, "they'll learn". But they won't. They are already in the process of writing new regulations, for the existing range of "unregulated" products. And by the time the regulations are in force, the industry will have moved on to something else, and we'll start all over again.