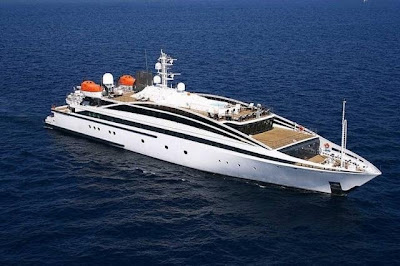 Before we hear any more drivel about the British media bravely attempting to "root out corruption" in its pursuit of Mr Mandelson, you might just recall that we have heard stories before about commissioners on luxury yachts, taking hospitality from rich men.

Does anyone remember, for instance, the little affair of Mr Barroso and Spiros Latsis, the Greek millionaire - and the role of the media? We do. We broke the story ourselves in April 2005 after details emerged from a question asked by Nigel Farage in the EU Parliament.

We followed it up here and here, only then to note that it was, "inevitable that British media attention would centre on" … er … "Mr Mandelson, even though the Barroso story raised far more serious implications." That "obsession" we noted, continued with "Mandy" articles in both The Sunday Times and The Scotsman.

As the details of the Barroso/Latsis tryst emerged, The Times wrote, on the ball as always, that Mandelson was "at the centre of a new row over sleaze last night after it emerged that he attached a free Caribbean holiday to an official trip just months after his political comeback as a European commissioner."

Despite the lack of MSM interest in the Latsis affair, we pursued the story, unravelling layer upon layer of interesting material, followed by Booker, compounded by additional detail as the story got murkier and murkier.

As we homed in on the details, did any of these wonderful blogs that are so interested in "corruption" link to us? Er …

Nevertheless, we continued our pursuit, alongside UKIP, while the Tory MEP group dropped out ... and our brave MSM continued to ignore the issue. But, with the details we had unearthed, UKIP got a motion of censure - supported by five Tory MEPs - which substantially raised the temperature of the affair.

Nevertheless, on the day, we reported:

According to the press officer for the Independent/Democracy Group, when he went down to the press office in the EU parliament with a sheaf of releases on the Latsis/Barroso story, so keen were the assembled hacks that he described it as "like walking into Trafalgar Square with an open packet of corn".

And the result? A search of Google this morning gives… nothing… ne rien… nada. However, the BBC's Today programme did a stonking story on Beckham's satin cummerbund.

We continued our coverage, with links only from a number of foreign blogs and some foreign media interest, while the brave, upright British media slumbered on. The few Tories who supported us got into trouble but we plodded on, ploughing our lonely furrow until the story petered out through lack of media interest.

A contact in Brussels tells me today that, the moment Mandelson got appointed, the MSM despatched dozens of hacks to Brussels, all with express instructions to "dig the dirt" on the former commissioner. He told me they had never seen so many British journalists in Brussels. Were they interested in what was going on Brussels? Nah. All they wanted was "dirt" – any dirt they could find, as long as it was about Mandelson.

I've said it before and, no doubt, I'll say it again. These people really are the dregs. And, of course, the "derivative" blogs just pile in and amplify the prattling.

On this site, are we really supposed to be impressed?