For a blog that is mainly concerned with EU politics (when we are not darting off to follow the hystérie du jour), we try to distance ourselves from domestic – and especially – party politics.

However, it has always been the case that our problems with the EU, and the very fact of our membership, lie not in Brussels but here. Never let it be forgotten that we remain in the EU because our Parliament as a body permits it. Within one day, if it so wished, it could repeal the European Communities Act, and we would be out.

What happens over here, therefore, is just as important to this blog as the other (some so-called) political blogs, perhaps more so as we are virtually the only major British blog which is consistently confronting the "elephant in the room", its continued presence illustrating the wilful determination of the political classes not even to recognise the existence of the problem, much less deal with it.

Between the two main parties, any expectation that this situation will improve is pretty forlorn but, of the two – in theory – there is a greater expectation (possibly entirely unrealistic) that it will be the Conservatives who will address some of the issues. It is, therefore, of some interest to us that this Party gets into office at the next election. This should have been a shoe-in but, given recent events, it is now not entirely certain.

To win – and then in any event, to form an effective government – the Conservatives must be, above all else, an effective opposition, and thence mount a credible campaign.

Thus, in a week when it was officially recognised that Britain was in recession and, on the day when the pound nose dived, the response of the shadow chancellor, George Osborne, was of some interest, his offering being posted on Tory Diary with the graphic reproduced below. 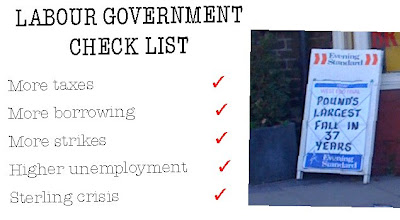 Osborne's textual response was as follows:


Once again, under Labour, the pound in your pocket is worth less. Indeed Gordon Brown has set a new record for Labour Governments, but it's not one he's likely to boast about. The 25 percent fall in the value of the pound over the last year is even greater than the devaluations under Jim Callaghan and Harold Wilson. It's a sign that international investors think Britain is badly prepared, as boom turns to bust.

This brought from me this pained response:


I do not think you even begin to understand how badly this type of "Tory tribalism" plays out in the real world. You may happily discuss how Mr Cameron has "decontaminated" the Tory brand, but what you need to understand is that the greater "contamination" is with the generic politician brand. This is making it worse.

Cameron was right in his early days when he pledged to end "Punch and Judy" politics, but we are seeing more of this than ever before - this post is a classic example. Iain Martin wrote an excellent piece in The Daily Telegraph yesterday pointing out that the impression with many voters was that the Tories were treating politics as a "game". I commented on this, applauding him. He was and is right.

The mood of the country has changed – is changing. You won't see it in the opinion polls (yet), but it is there. The polls don't ask the right questions and, in any event, people are not going to admit they are scared to total strangers. Half the time, they won't admit it to themselves. But people are worried, uncertain – afraid even. The mood is sombre, more than a little bit resentful and can quickly turn to anger.

To see this "Punch and Judy" stuff is not helpful. It comes over as lightweight and facile. We need "clinical" opposition – cold, dissection of the appalling policies of Mr Brown, and careful, sensible alternatives, delivered with gravitas and conviction.

In short, when times are hard – and they are going to get a lot harder – we need grown-up leadership. We can do without – as it comes over - a bunch of prattling, overgrown schoolboys scoring points off each other.

Picking up just one point from this, we aver that we need "clinical" opposition. This brings to mind the Saatchi poster of 1978 which is largely credited with winning the 1979 election for the Conservatives (illustrated at the top of this post).

What makes the poster so brilliantly effective, of course, is that it is brutally clinical. With one deft, but staged, photograph and a mere three words, it identifies with stunning precision the failure of Labour policy in a way that is both direct and unarguable. The punch-line, "Britain's better off with the Conservatives", is almost redundant – it is so self-evident.

Compare and contrast the Osborne graphic. Taken in with a quick glance, one of the more prominent features is a series of red ticks. This is a positive image. The "Labour government check list" is, on first sight, being given the thumbs up.

The heading itself is also positive. It speaks of the Labour government, a word that still conveys authority and prestige. There is none of Saatchi's economy, which would have said: "Labour's check list".

As for Labour's sins, these are the least prominent part of the graphic but, alongside the bright red "ticks" - signifying approval - you could almost take them as "good things". As to whether they unarguably represent Labour failings, that is … arguable. More borrowing in a recession is, according to Keynesian theory, a good thing. Certainly, the government would argue this, in a way that it would never hold that unemployment is ever good.

Looking at the text, which should not detain us long, not only is its tone petulant, but it is also "bubblespeak". The reference to the devaluations under Jim Callaghan and Harold Wilson calls up ancient history, of which the bulk of the population will be entirely unaware. It has absolutely no relevance to our current situation. This is a political insider speaking, not someone who is reaching out to his audience and trying to identify himself with its concerns.

If this sort of dross continues, opposition leader David Cameron will go down in history as a political genius. He will be the only leader of a political party who lost an absolutely unloseable election. And that takes real genius.