It ain't going to work 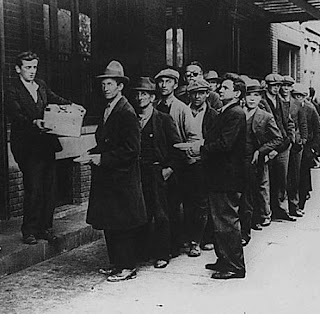 Despite all the gushing in the media, the drooling about "saviour" Brown (or not, depending on what you read), this "rescue" package is not going to work. It is addressing the symptoms of the problem, not the disease itself.

This is very much like old-fashioned doctoring, before the days of antibiotics, when you tried to cool the fevered patient, in the hope that it would break, and the natural healing process would take over. Sometimes it did work, but most often the patient died.

Here, the infective agent is so powerful that hosing down the "patient" with money is only going to buy time – and very little at that.

The signs of impending disaster are there. John M. Berry in Bloomberg tells it as it is.

"The world's banking system is caught in a vicious trap, with a forced sale of assets at one institution wiping out capital at others holding similar assets," he writes. "Think of it as extraordinarily high reverse leverage."

And, after considering the options, he comes down on the side of blaming "mark to market" accounting. It's way past time to suspend it, he adds, "or somehow to make investors and analysts understand that fire-sale transactions aren't supposed to be having such broad implications."

How deep the rot has infiltrated the system is demonstrated with alarming clarity by Berry's further observations:

Asset writedowns and credit losses are approaching $600 billion at the world's biggest banks and securities firms, and the $443 billion worth of capital raised to cover them hasn't been enough to reassure investors. I wonder what that balance would be if the world weren't fixated on mark-to-market accounting.

According to Bloomberg figures, Citigroup Inc., Bank of America Corp. and JPMorgan Chase & Co. have all raised more capital than their writedowns and losses. Nevertheless, the stock prices of the first two have been hammered since the crisis began more than a year ago. (JPMorgan Chase has fared better.)

So one has to ask: How much capital will the U.S. government have to inject into these and other banks -- along with other actions -- to thaw the world's credit freeze? Given the mark-to-market climate, it may take more than the $700 billion authorized in the recent rescue package.

Berry then cites Harvard University economist Kenneth Rogoff, who said on 10 October that the US "bail-out" will take much more than $700 billion. If it does, he says, the next president will have to demand that Congress provide it.

But they are hosing money into a bottomless pit. The potential losses from asset write-downs far exceed in value anything governments can replace. They are, as we noted earlier, "betting the farm", in the hope that, somehow, their actions will defy the laws of economics.

The trouble is, if the bet fails, you – as do we all – end up on the bread line. And that is where we are headed.