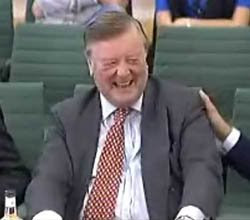 Rightly, I think, we've focused heavily on the role of the regulators in this financial crisis, pointing to their considerable failures.

An unlikely ally now comes in the form of Kenneth Clarke MP who, in the Independent on Sunday today, has harsh words for the tripartite system of regulation between the Bank of England, the Treasury and the Financial Services Authority, which took away the Bank's supervisory powers.

"We had enough regulations in place to prevent this, but we just didn't have regulators who were up to it ... If the FSA had been more closely in touch with the banks," he says, "its staff could have spotted that the business models practiced by Northern Rock and Bradford & Bingley were flawed."

He then argues that if the Bank of England had maintained it's banking supervisory powers, it would have seen and controlled the excessive lending by the banks. The FSA failed because it never really got into supervising the banking system. "All the Government's rhetoric was for a lighter touch. But the FSA is not there to be loved by bankers and ministers. It must be made of sterner stuff. It's too easy after the event to cry out for more and new regulation when, in most cases, it's already there," adds the former chancellor.

The Wall Street Journal, however, makes a different point. In an article headed, "Where were the boards?", it suggests that there is one very important question which has gotten little attention: Where were the boards of directors of the companies that helped create this mess?

Boards of directors, it says, set the guidelines and compensation levels, and in the end are ultimately responsible for the performance of their CEOs and companies. They have a clear-cut fiduciary responsibility to provide oversight. We should not ignore their roles in contributing to this financial meltdown.

Behind the CEO of every Freddie Mac, Bear Stearns or Lehman Brothers who led their company down a path toward financial ruin, says the paper, there was a board of directors that sat by silently and let it happen.

Interestingly, in his long, free-ranging interview with the IOS, Kenneth Clarke does not mention this issue at all, despite his declaration of interest in the Parliamentary register. But then, as a paid member of Advisory Board of Centaurus Capital Limited - a European hedge fund managing a billion pound portfolio and major shareholder in the Friends Provident insurance company, which is struggling to contain its losses – Mr Clarke wouldn't be wanting to talk about messy things like fiduciary responsibility, would he?

An even more interesting omission is highlighted by Clarke's comments to the IOS, where he tells the paper that it would be wrong to let the bankers drop the mark-to-market accounting standards. "That would be a terrible mistake and a step back," says Clarke. "It's the bankers, particularly the Europeans, who are trying to wriggle out of the mess they have got themselves into and blame something other than themselves."

How fascinating it is that the Centaurus Alpha Fund, owned by the company of which he is a member, announced last May a formal "Amendment of valuation methodologies", breaking away from mark to market valuation (as is permitted under certain circumstances). Instead the company decided that it would use the:

…latest available valuation provided by a relevant counterparty and as adjusted in such manner as the directors, in their sole discretion, think fit. If no such valuation is available, the directors will determine the value in good faith having regard to such factors as they deem relevant.

You might have thought that the IOS could have mentioned this interesting snippet to Mr Clarke, on top of his board membership of Centaurus Capital – detail of which is strangely absent from his profile printed in the article. But, since Clarke is also an non-executive director of the Independent News and Media (UK) group, which actually owns the Independent on Sunday, one supposes that the paper would not be too keen to upset him.