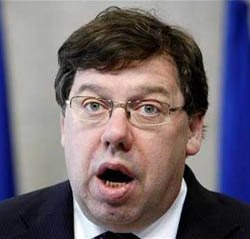 The "(European partners) indicated they can be helpful in some respects ... but they're also making it very clear they don't have an interest in re-ratifying or amending the treaty in a substantive way."

Thus said Irish prime minister Brian Cowen, as recorded by Reuters today, telling his grateful people that Ireland may have to reconsider its rejection of the European Union's "reform treaty".

Why Reuters is still calling the constitutional Lisbon treaty the "reform treaty" is anyone's guess, but this is also the agency which calls British MPs "lawmakers". It seems you just can't get the staff these days.

Anyhow, it is so comforting to learn that the "colleagues" are prepared to be "helpful", just when we thought they were a bunch of evil, self-serving … That goes to show how wrong we've been about them all along.

However, it seems there is a mailed fist inside that … er … mailed fist. Cowen also purrs: "We need to come back and say to the Irish people honestly, here is what is on offer from the European Union, do we wish to revisit this question or do we not?," He adds: "If 26 other partners want to proceed in a certain direction and we ... are not going to respond in a positive and constructive way to address that issue, then there are consequences."