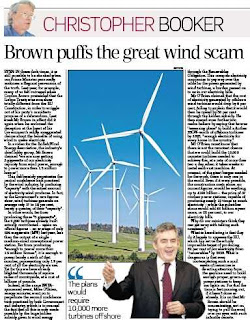 To use the vernacular, these figures on electricity supply and consumption "do your head in" - what with kilo- mega- and gigawatts as units of capacity and megawatt hours, etc., as units of production.

Then, as everybody knows – when you are trying to work out delivered capacity – you take the former, multiply the figures by 8,760 to give the latter and then divide by the load factors. Simple really.

In doing his sums for this week's column, Booker alerted me to the fact that he had got the arithmetic wrong. I should have picked it up, but there you go.

Anyhow, in taking Gordon Brown apart on his claims last week that, "We are now getting 3 gigawatts of our electricity capacity from wind power, enough to power more than 1.5 million homes," Booker asserted that, "This deliberately perpetuates the central confidence trick practised by the wind industry."

It confuses, he writes, "capacity" with the actual amount of electricity wind produces. In fact, as the Government's own figures show, wind turbines generate on average only 27 to 28 per cent, barely a quarter, of their "capacity". This means that, far from producing those "3 gigawatts", the 2,000 turbines already built actually contributed - again on official figures - an average of only 694 megawatts (MW) last year.

That is, as Booker rightly notes, less than the output of a single medium-size conventional power station. But then he goes somewhat astray arguing that, far from producing "enough to power more than 1.5 million homes", it is enough to power barely a sixth of that number, representing only 1.3 per cent of all the electricity we use.

Unfortunately, if you take 694 megawatts, multiply it by 8760 to give annual megawatt hours, and then divide it by 3380 kilowatt hours – the annual electricity consumption of the average home (although there are higher figures) – you get, near enough, 1.8 million. By "conventional" accounting, that is the number of homes supplied. Gordon Brown has been conservative in his claim.

In reality, though, that figure also is fiction. The point about wind power is that it is intermittent. For, say, ten percent of the time, the whole estate will produce 100 percent of its capacity. That means, rather than 1.8 million homes, it will be able to serve well over 5 million homes. For rather more than fifty percent of the time, however, the estate will be generating no usable electricity which means – a rather easy sum to work out – it will be serving no homes at all.

But even those calculations are fiction. The figure of annual household consumption, at 3380 kilowatt hours, does not reflect diurnal or seasonal variations. In the summer, in the wee small hours, consumption will be next to nothing. On a cold winter evening, demand will be massively higher than the nine kilowatt hour per day average.

Therein lies one of the many complications. The art of electricity production is matching supply with demand and if you have an intermittent supply – which is also unpredictable – then you can (and will) get a situation when electricity is produced when you do not need it, and cannot use it, while at other times you will be crying out for electricity and the system is idle. You could, therefore, end up with the wind farms churning out power when no one wants it and idle when power is desperately needed. Number of homes served, etc., in this context, are meaningless.

However much you mess about with the statistics, you cannot overcome those very simple facts: that wind is both intermittent and unpredictable. The bigger the wind estate becomes, the more significant those problems become, and the more expensive their resolution. Not least, you have to maintain a huge back-up supply, produced by conventional (fossil fuel) power stations, as insurance against a loss of wind capacity.

As to the costs, should the government actually reach its target of 25GW renewable power, the cost of the hidden subsidy (the Renewable Obligation) will be in the order of £6 billion a year, at today's prices. That will, as Booker correctly noted, add 25 percent to the cost of the average electricity bill – again at today's prices. Also, in getting there, we will have spent £100 billion, the price of 37 nuclear power stations, capable of producing nearly ten times as much electricity.

The more realistic scenario – again pointed out by Booker – is that there is not the remotest chance of achieving the renewable target. Thus he writes, "what is dangerous is that even contemplating such a mad waste of resources is diverting attention from the genuine need to build enough proper, grown-up power stations to keep our lights on."

"For that the time is fast running out, if it hasn't done so already," he warns. "It is on that Mr Brown should be concentrating, not on trying to pull the wool over our eyes with such infantile deceits."