The man who knows? 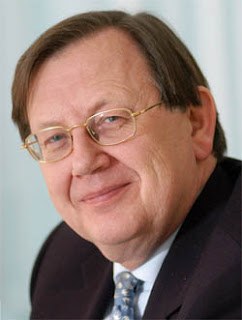 Normally, after "deep immersion" in an controversial subject, some clarity begins to emerge and the arguments begin to settle. However, several weeks into the deep crisis phase of this financial nightmare, the issues are no clearer. If anything, they seem even more obscure, with crucial aspects entirely unresolved.

In many respects, this should not be surprising. Not only are we reaching into the depths of banking theory which, frankly, very few people understand – or ever will - we have the overlay of highly complex regulatory systems, framed at national, regional and global levels, together with national and international politics and, of course, the drama of the events themselves.

One yearns for some wise soul to reach out and explain it all, in very simple terms, telling us what to look for, what matters, what is fluff, and to where all this is leading. That, of course, is the stuff of dreams – of child-like fantasies. In truth, there is not one problem but many, all interwoven, and the complexities of modern politics, played out on an international tableau, are such that they defeat even the most experienced commentator.

How, as one example, can you possibly assess, or even begin to predict the outcome of the interplay between so many parties, many of whom are completely unknown, yet will most certainly, have a vital part to play in the forthcoming dramas – as indeed they have in the events which built up to this crisis?

Who, for instance, knows the name of the chairman of the Basel Committee on Banking Supervision? And, if you were told that it was a man called Nout Wellink (pictured), also president of the Netherlands Banks, what would that mean to you?

However, while one very rarely sees (on television or elsewhere) or hears from this magical mystery Nout, he is the father (or godfather) of the Basel II agreement - the agreement which is at the heart of our banking crisis (or not). And in September of this year he delivered a speech to the International Conference of Banking Supervisors in Brussels, outlining what he thought to be the main reasons for the crisis.

In Nout Wellink's view, "poor execution of the basics" are at the root of today's problems, with complacency – on the part of bankers and supervisors – certainly playing a role. The banking industry was exceedingly optimistic during times of benign economic conditions while failing to keep focused on the "big picture and the longer term horizon".

Says Wellink, some fundamental aspects of risk management were violated. As supervisors, he declares, "we have seen time and time again that financial crises are characterised by the failure to adhere to basic risk management principles, especially during times of financial innovation." He then goes on to state:

This crisis is no different. Weakness in fundamental underwriting principles, among other factors, was a key contributor to asset quality problems. So was poor risk management, which at some firms allowed the build-up of massive risk concentrations across the firm that further compounded already shaky asset quality. Some banks were caught completely unaware by concentrations to subprime loans that they had in their loan portfolios. Others did not fully understand their full exposure to subprime mortgages, particularly when they purchased an exposure that contained dozens of other exposures – I am of course referring here to CDOs of ABS. Poor asset quality and risk concentrations are at the heart of the turmoil involving subprime mortgages which has led to the exceptional uncertainty and volatility that we see today. These problems have been further compounded by uncertainties relating to valuation practices.

Here then is a man who should know, and here he is stating where, in his view, the problems lay. Is he right and, if so, what are the real implications of what he is saying?

Crucially though, what I take from this is Wellink's comment that, as supervisors, "we have seen time and time again that financial crises are characterised by the failure to adhere to basic risk management principles, especially during times of financial innovation."

If he and his fellow "supervisors" have seen it "time and time again", why were they not able to predict this crisis and, if they did, why did they not try do something about it. If they did that, what prevented them from succeeding?

These, is seems, are questions that need answering. Most of all, though, is the question implicit in Wellick's very closing comments of his speech: "… enforcement by [central] banks and supervisors of the basics of sound risk management and underwriting practices are key to promoting a return to financial stability," he asserts. But, if such enforcement is the "key to promoting a return to financial stability," was it not also the key to preventing its collapse? And, if it was, where did it go wrong, and why?

It seems, after all, we are back on familiar territory.