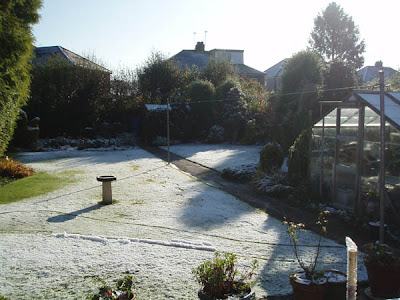 This was the scene in Coventry this morning, that bit of England stuck somewhere between London and Yorkshire the paradise at the centre of England. It was sent to us by an embattled reader (nice garden!), who bravely withstood the vicissitudes of this frenzied nightmare to record the scene.

Our American cousins may look upon this as a minor event, but what they fail to understand (but then what do you expect of a nation that has Obama for a presidential candidate?) is that this is British snow.

While it might take feet – or even yards – of the mamby pamby Yank snow to do any appreciable harm, British snow is so powerful that even half an inch of the stuff is enough to bring an end to life as we know it.

Less even than that has been known to bring down power lines, block our motorways (US translation: freeways) and stop every train in the country – even those in areas where no snow has fallen – causing untold misery and disruption to millions of people.

London snow is even more powerful and to be feared all the more. Two inches, especially if it falls within a mile of a national newspaper office, has the front pages cleared and a national emergency declared. There are urgent debates in Parliament which invariably culminate in the appointment of a Minister of Snow. That usually ensures we have warm, wet weather for the next six months.

Americans, therefore, need to count their lucky stars. In a few days time, they may have the misfortune to have elected what will most certainly be one of the worst presidents in history – and there is some considerable competition for that – but at least they do not have British snow. That really would be a crisis.