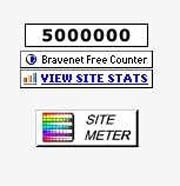 It was on 5 March this year we turned the magic four million, and now we've done 5,000,000 – over five year's of blogging to achieve what the BBC achieves on its website on a bad day. That is a measure of our success, if you take numbers alone as a guide.

The numbers are, of course, meaningless. What counts is that mystical word, "influence", which cannot be measured, except in results and sometimes not even then. In one particular way, however, we can measure what we have done.

The counter you see, with the magic figure reproduced, is linked to two blogs, this one and our sister blog, Defence of the Realm – currently sadly neglected as we have focused on the financial crisis. We will pick up soon where we left off, I promise.

Earlier this year, this blogger was invited down to the MoD for a press reception, to meet the Secretary of State, Des Browne. One blogger, there with a press pass, amongst all the high-flying defence correspondents of the major nationals, and the hangers-on. There were several "big names" that we recognised.

After a few glasses of an execrable cheap red wine, I was taken over to meet the Secretary of State, who was then surrounded by the "great and the good" of the media, deep in conversation. When I was introduced, he turned and addressed the throng, declaring a loud voice, "this is Richard North, he runs the blog Defence of the Realm. And he has had more influence on defence procurement policy than the rest of you put together."

I have never seen so many pissed-off hacks in my life. It was truly a moment to savour, and one that was well worth the fare down to London and the hundreds of hours I've put into that blog.

Of course, if that had been Iain Dale, of Guido Fawkes, or many of the rest of the preening chatterati that calls itself the blogosphere, we would never have heard the last of it. Had any of them had a Minister of State come onto the comments section of their blogs, to confront and argue with points they had made, equally, there would have been no end of preening.

They haven't. But we have. Our little blog had Paul Drayson on the site, arguing the toss about FRES, comments which were also posted on the MoD website. But, because we are who we are, the chatterati ignored it, too busy telling each other how wonderful they are, and drawing up their little lists, where everybody gets a prize and everybody gets to feel how clever and important they are. But then, most of them would not know what FRES was, even if it leapt up and bit them on the backside.

The difference is that we had used the blog to its best effect, what many hoped the blogosphere would achieve – the expression of informed democracy in action. We ran a tightly focused, well-informed campaign on Snatch Land Rovers, and we prevailed.

For sure, other bloggers joined in – some good ones - but not the anally-retentive "big hitters". They were far too grand to get down in the weeds and fight. We had no support at all from them at all.

We did have the support of the Booker column, though, and then The Sunday Times. Does anyone think their front-page story happened by accident? How many other blogs have put a front-page story on the leading Sunday broadsheet, with a full-page focus story to back it up?

And we were right to push the point. We attracted support from a lot of good friends in parliament, we were briefing people in both Houses and, when we saw the debates in Hansard, we recognised of lot of our own words – we still do. How many other blogs can say that?

The result then was the speedy arrival of the Mastiff, far earlier that we could have possibly imagined, due much to the courage and determination of Des Browne.* This armoured vehicle has gone on to save lives, many lives and is still saving them. We did that – with a lot of help. But we started it, and if we achieve nothing else, we can at least be content that there are soldiers alive and well today who would otherwise have been dead or maimed.

We have achieved other things, smaller things but nonetheless important, on this blog as well as DOTR - although we are playing for bigger stakes here, so the successes do not come so easily. We have turned the ship of state round in a number of ways and there are more changes in the system which will ensure that some people in the future who will live, when otherwise they would have died. We know this because we have been told this by people who know, people you have never heard of but who exercise vastly more power than you can begin to imagine.

We don't parade these things on our blog. We don't need to. We do not feel the need to tell our readers how important we are. Frankly, we are not. The issues we deal with are important. They shine through and we allow them to speak for themselves. That is why things happen.

In doing what we have been doing – we have attracted a great number of friends, who count as our small band of loyal readers. In like manner, we have attracted enemies, many on the blogosphere, who can't stand us. They don't link to us, and ostentatiously link to others who have run derivative stories based on our material. We are not stupid – we can recognise the signs and the atmosphere.

It was the same atmosphere when I walked into that court in Motherwell to tell a room packed with hostile lawyers things they really did not want to hear. There they all were, sharpening their knives for the cross-examination, ready to take me apart. I stood my ground then, and we as a blog will stand our ground now.

I think what particularly hacks off the chatterati so much is that we – and I count my co-editor firmly in this – are so often right. And I don't mean we are right all the time, on everything. We've made some spectacular mistakes, and often get details wrong.

But we are right in principle, especially on this blog. We are right to focus on the European Union, and chart how it is slowly, steadily destroying this country and everything we hold dear. We are right to point out when the venal media and the loathsome politicians gloss over the "elephant in the room" and pretend, mostly to themselves, that things are normal, that they are under control - when they are not.

And we are right to take on the British blogosphere, when it is so obviously not living up to its earlier promise, and is instead descending into a paler version of the low-grade media political sketch-writing that it claims to detest so much. Why should the blogosphere be immune from criticism, any more than is the MSM of which it claims to be the rightful heir, or the politicians it so freely attacks?

We are, in that sense, the little boy in the crowd shouting that the Emperor has no clothes. Of course we are not liked. The crowd never likes to be told the truth when it is in the grip of a delusion. Hence it ignores us and hopes we will go away.

Had we pandered to the crowd and retailed the tat, the theatre and the trivia, no doubt our hit rate would have been much higher. We might even be looking at ten million hits instead of five. But we are not. That we have only made "only" five million, therefore, is a testament to our value and the good sense of our readers who do support us. It is comforting to know that there are still some grown-ups left in this world.

Thus, we will keep blogging. We are not in this for the fun of it. And believe me, although it has it moments, there are times in the wee small hours, when you are fighting against overwhelming tiredness in order to finish that last post of the long day, one really wonders whether it is worth it.

But, this is a campaigning blog. This is a tool, a means to an end. And we are committed to that end. As long as we are, and as long as this blog continues to be an effective tool, we will continue blogging - for as long as we can.

* That, incidentally, was a classic example of where the bloggerati got it completely wrong. After that dangerous idiot Hoon, and that posturing fool Reid, Browne was the most effective SoS for Defence of the Labour administration and even before that. Given a near-impossible hand, in his quiet, undemonstrative way, he set about dragging the MoD from the brink of collapse, putting in hand a major re-equipment programme for the Army, to equip it for the wars it is fighting, instead of the war the Generals wanted to fight - in the teeth of opposition.

But instead of looking behind the fluff, the bloggerati piled in behind the media, with its cheap jibes of "two-jobs Des" after he had also been made SoS for Scotland. If there was a mistake - and mistake there was - it was Brown's - not Browne's. Browne didn't want the job but did as he was asked, and got on with it. But anyone who thinks that affected his work as SoS for Defence simply has no idea how modern government works. What do you think an SoS has a Department for?

On the other hand, the Tory bloggerati happily swoons over Hague - who is a part-time shadow foreign secretary, in between his lucrative day jobs. Time after time during the Lisbon treaty debate, the man has shown he is not up to the job - which is not surprising, given how little time he spares from his money-making activities.

That is the measure of the beast.