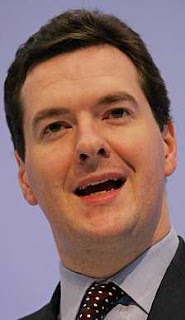 According "a source close to the Tory leader": "George has been a bit of a prat" (BOAP). This is retailed to us by The Daily Telegraph - on the front page in the print edition. Mr Heffer is even less kind.

Funnily enough, there is absolutely no mention of either piece in that sterling political blog, which charts the fortunes of the Conservative Party.

A little while ago, we conjured up a picture - meant to convey the full horror of the financial crisis – of a runaway train, the driver having leapt to safety, leaving no one at the controls. It was this image of no one actually in control that represented our worst nightmare.

In a conversation with a friend (I do have some left) this morning, however, we mused upon an even worse scenario. Imagine, if you will, terrified passengers, sensing something wrong with the train, struggling their way forwards, through the rocking and swaying carriages.

With the buffers looming on the near horizon, panic rising, they finally make it to the front of the train and, with the strength born of desperation, break through the locked door that separates them from their imagined salvation.

As they pour into the cab, what do they see? A suntanned George Osborne, the great political "tactician", slouched in the driver's seat with his feet on the dashboard. He is chatting animatedly to "Dave" on his Blackberry about the next move against Peter Mandelson.

Mr Heffer has it, methinks.