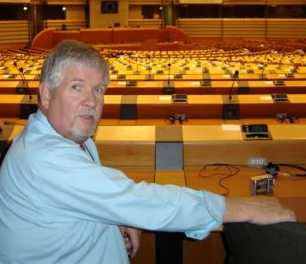 Tom Wise, elected as a UKIP MEP*, was arrested last night on suspicion of obtaining money by deception. We understand he spent the night in custody and, after helping Bedfordshire Police with their inquiries, is currently on police bail.

The investigation is being supported both by the EU parliament authorities and OLAF – the EU's "anti-fraud" office - and is believed to be part of more wide-ranging enquiries into the affairs of MEPs in UKIP and their parliamentary Independence and Democracy group. The veteran Danish former MEP and group leader, Jens-Peter Bonde, has been mentioned in connection with these.

One subject of the "broader inquiries" was identified by this blog in February 2007 and, while the attentions of Mr Plod are undoubtedly well deserved, and there is clearly a case to answer, the timing of Wise’s arrest and the fact that other UKIP MEPs are also under investigation is, to say the very least, unfortunate.

With less than a year to go before the 2009 euro-elections – when UKIP might have been expected to do well – there is the high possibility of a run of negative and highly undesirable publicity. Even if not actually intended, this may have the effect of damaging UKIP's electoral prospects.

On the other hand, so many MEPs from other parties also have their snouts in the trough, that the action being taken against UKIP and its allies may appear to be a deliberate attempt to undermine the entire eurosceptic campaign. In the case of the odious Mr Wise, this will not be true - even if UKIP is unavoidably caught up in the fall-out.

* Wise's current status remains obscure. Although the parliamentary leader Nigel Farage has issued a declaration that Tom Wise has had the "whip removed", there is an ongoing dispute as to whether the MEP group has the authority to do so. In the interim, Wise continues to maintain his website as a UKIP MEP and the EU parliament currently lists him as a UKIP MEP. Wise is still a fully paid-up member of UKIP, having renewed his subscription earlier this year. To date, there has been no official announcement of disciplinary proceedings being lodged against him.