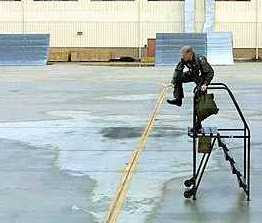 Bruno Waterfield is back on the case, telling us via The Daily Telegraph that the EU Treaty is "likely to be imposed by stealth despite Irish no vote".

With Rosa Prince, he informs us that at least 85 percent of the measures proposed in the Treaty can be introduced using existing European powers. And a large number have already been established in anticipation of ratification, including the Human Rights Agency and the European Defence Agency (to say nothing of the Space Council).

Dan Hannan also pitches in on the same theme, making three of us (four, if you want to include Prince) with absolutely no illusions that, Irish vote notwithstanding, the "colleagues" are going to plough on regardless.

Actually, though, the "85 percent" is somewhat arbitrary and, to an extent, meaningless. Even if it is measuring articles in numerical terms, not all have the same weight and some are very much more important that others.

The huge blind spot is the European Council. Almost to a man (and woman) commentators have fallen for the bland description of "institutional" reform, not understanding that this apparently harmless little word is a eu-phemism for "governmental".

Thus, they have not even begun to understand that one of the most important provisions of the new treaty is to bring the European Council into the maw of the institutional framework, bringing the Supreme Government of Europe closer to its final shape.

This, above all else, is why the "colleagues" are not going to stop. Their construct cannot be complete until they have their governmental institutional structures in place, and that is why they have invested such huge political capital into securing this treaty.

All of that, of course, leaves William Hague, the shadow foreign secretary, bleating in the wilderness. He is cited by the Telegraph as accusing the government of political cowardice, in failing to admit that the treaty had been killed off by the Irish "no" vote. He is also calling for a halt to ratification.

But, of course, the treaty is not dead. As we wrote earlier, it is not even resting. And that is why Miliband is insisting that British ratification will go ahead. He cannot allow any other course and, even if – as we expect – the Lords will put down a motion today calling for the process to be abandoned, it will continue.

One wishes sometimes that Hague would stop grandstanding, and tell it like it is - except that he probably has no idea what is going on anyway. Hence he has declared: "The only point in other countries continuing to ratify the treaty is to put pressure on the Irish, to bully the Irish - a kind of preparatory move to saying to the Irish 'You're going to have to vote again on this.'"

But then, this really is a "stealth treaty". The man can't see what's coming.