Irish "no" vote reduced to a "glitch" 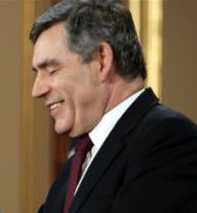 Claims that Gordon Brown was ever a "eurosceptic" must surely now have died. With the constitutional treaty having received royal assent this morning, the man is being hailed by the "colleagues" as the hero of the hour for keeping the treaty alive.

There can be no doubt that, had Brown decided to allow suspension of the treaty, it would have been on the way to its coffin, whereas he has simply banged another nail in the coffin of our parliamentary democracy.

No wonder EU leaders and senior officials are today "lavishing praise" on our provincial governor, with Hans-Gert Pöttering, president of the EU parliament, chortling that the EU Treaty was "certainly not" dead following the Lords vote yesterday.

Barroso is joining in, declaring: "I would like to congratulate the United Kingdom on the approval of the Treaty," thanking: "… the government and Parliament for the constant support for the new Treaty during the negotiation and ratification process."

Janez Jansa, Slovenia's prime minister adds: "Another endorsement of the treaty proves that it is still a living document .This confirmation gives the EU a strong impetus and motivation for the completion of ratification procedures in the rest of the member states."

And then there is Iñigo Méndez de Vigo, a senior Spanish MEP who happily observes that, "The British vote reduces the Irish no vote to a glitch." I am sure the Irish will be pleased to hear that.