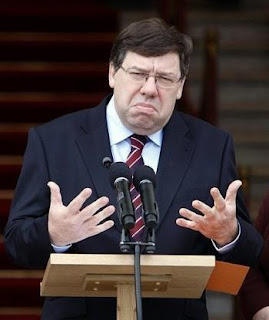 Given a choice, it would have been nice to break away from the aftermath of the Irish referendum. But, with papers full of it today, and barely anything else reported on the EU front, there is no escaping it – especially as Booker devotes the larger part of his column to an analysis.

In coming days, he writes, we shall see the degrading spectacle of the EU's political class wheeling out their long-prepared formula for ignoring the Irish verdict, and imposing their constitution-by-any-other-name regardless. The European project will be revealed for what it has been all along: a mighty system of state power, run by the political class with lofty contempt for the people it rules.

However, as I ventured in my last post, on this subject, there is going to be a great deal of "noise", which will blur the picture, obfuscate and confuse rather than enlighten.

A good example of this is the single newspaper, The Sunday Times, which manages two mutually contradictory headlines: "Britain presses on with Lisbon ratification" and "No 10 admits treaty is finished".

When that second story also reports that, "In the short term, Brown will press ahead with Britain's own ratification process," thus inherently contradicting its own claim, it is evident that the paper is all over the place and has nothing useful to offer.

Despite that, the leader is staunchly written, with the title: "Contempt for democracy". That is helpful because it cements in precisely the message that should apply to this corrupt construct, the European Union. As for the content of the leader, don't bother reading it. It is as incoherent as the news pieces.

Nevertheless, whether the "colleagues" are successful or not in ramming their treaty though, things will never be the same. In that sense, the Irish referendum has been valuable. It shows the "colleagues" as the power-grabbing fanatics that they really are. Merely the number of comments on the online stories, and their tone, demonstrates that the EU has been seriously damaged.

That much is also evident from the sheer volume of coverage, which has now grown to a torrent, Google News at one time registering over 7,000 stories on the issue. The EU is suddenly pinned in the spotlight and, as the heads of states and governments gather for their European Council on Thursday, every move they make will be being watched.

The one thing we can guarantee then is that the Taoiseach, Brian Cowen (pictured), is in for an interesting time. Papers like The Guardian are going for the "soap opera" with reports that he is in for a major clash with the "colleagues" after "senior strategists in the Republic's ruling party decided against a second referendum."

The Independent takes a similar line but another referendum, we have already suggested, was never on the cards. More likely, talk of a rift is largely theatre, partly aimed at keeping the media chattering and missing the main points – not least that Cowen is at one with the "colleagues" in wanting the treaty to go through.

Howsoever, even with the media in full flight, we stand by our analysis, and fully expect our predicted game plan to be rolled out. We can, though, build in one proviso. With the glare of the media spotlight so intense, some of the "colleagues" may crack under the pressure and break ranks. There is just a chance that the best laid plans of mice and commissioners might fall apart.