The game is far from over 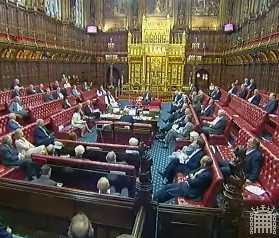 Having complained long and hard about the lack of media interest in EU affairs, the boot is now on the other foot. There is now so much coverage that it is hard to keep track of it. Much of it is noise of course, but the sheer volume does suggest that the Irish referendum has caught the media, if not the popular, imagination.

Particularly impressive is The Times today, which runs no less than four articles, including a comment piece from Peter Riddell.

It is there, though, that you can see the media attraction, as the issue now has a strong domestic dimension, Riddell arguing that it is: "Tough for Gordon Brown to avoid EU nightmare after Irish reject Lisbon treaty".

Of particular interest is a move by the Tories in the Lords to put up a motion calling for the suspension of the ratification process - the main story in the paper – and one which has already attracted the opposition of the government. Thus does Riddell think that the ratification Bill will still get its third reading tomorrow but, he ventures, "the margin could be narrow".

Nevertheless, The Times puts its weight behind the Lords, arguing that, as long as the outcome of the constitutional Lisbon treaty is so uncertain, it should not be ratified.

The reaction of most EU governments to the decision of Irish voters to reject the Lisbon treaty has, says the paper, been extraordinary. There has been contempt - suggestions that the Irish people are fearful, uncomprehending and irrational; there has been denial.

Wolfgang Schäuble, the wonderful stage German is also cited. It is he that we featured on Sunday - abstracted from Deutsche Welle - declaring that "a few million Irish cannot decide on behalf of 495 million Europeans". At last, the paper has caught up, now railing against the "combination of arrogance and unreality" of European leaders who are "busy briefing that nothing has changed and that the treaty sails on."

This is, of course, what we have been trying to point out ever since last Wednesday and, now that the penny has dropped, the great Thunderer is mortified.

To pass the Bill on Wednesday, it says, is therefore to pass into law a treaty that may change profoundly, says the paper, or may never be implemented at all. The only purpose in doing so is to bully the Irish.

Before the third reading begins in the Lords, that House retains the ability to return the treaty to committee for further detailed consideration. This is an option very much worth preserving given the current uncertainty. Peers will be given the chance to vote to delay the third reading. They should take it.

There are few marks here for analysis but the fact is that the "colleagues" rely on doing their work in the shadows, away from the bright light of media scrutiny. With the media hue and cry now full on, it no longer matters quite what they intended – the barrage of hostile comment is going to tax their nerve and resolve. 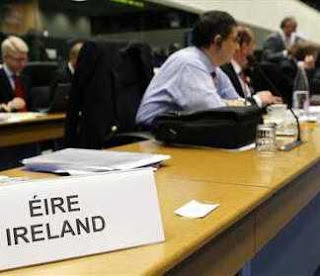 The theme that Ireland is somehow going to be cast into outer darkness, with the rest of the member states setting up a "two tier" Europe has somehow caught the imagination, and it is one that The Daily Telegraph also pursues – as do many of the other media outlets.

Ambrose Evans-Pritichard savages this idea on his clog, referring to the "bullying treatment of Ireland", declaring attempts at exclusion as "not legal". Any attempt to proceed without Irish compliance, he writes, is a Putsch.

Such is the interest in this that the issue even passes the Daily Mail test, with that paper offering a long piece, putting Brown in the frame for refusing to kill off the European "constitution" despite last week's decisive 'No' vote from Ireland

More measured – as one might expect – is the Financial Times which is suggesting that Ireland will be offered additional guarantees of its sovereignty – possibly in areas such as taxation, military policy and family law – under an emergency plan to save the treaty.

But that is neglecting the essential fact that this would have to be put to another referendum, when there is a very real possibility that the Irish would reject by an even wider margin. Altogether, the media is in as much disarray as it would have afflicting the "colleagues".

That is added to by the europhile offerings from The Guardian and the Independent, the former – with input from our forum - suggesting that the Czech situation is by no means clear-cut.

That said, there is no easy way to penetrate the noise level generated both by the media and loose-tongued politicians. It is going to take a while for the dust to settle and a clear line emerge. The crucial time is going to be this weekend when we get to see the European Council communiqué but, if by then, they have not forged a common line, we can assume the Irish have done serious damage to the "project".

Nonetheless, the "colleagues" have an unparalleled capacity for snatching victory from the jaws of defeat. The game is far from over.