The glory of France 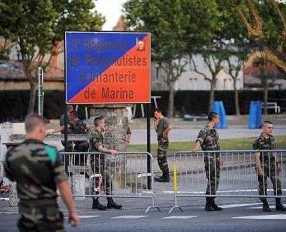 There is one very obvious reason why a French soldier should have opened fire with live ammunition instead of blanks at a military display in Carcassonne, injuring 17 spectators, some of them critically.

Quite simply, there must be a massive shortage of blank ammunition in France, the bulk of the stocks having been despatched to Afghanistan for use by their national contingent over there. We would not, after all, want these brave peacekeepers to get hurt by doing anything so dangerous as carrying live ammunition.

If this might be considered a tad unfair, it is somehow preferable to the official explanation being touted, that the soldier who loaded the live ammunition did so "by mistake".

If that is the level of incompetence in the French Army – in what was, in fact, an elite unit – then it rather puts into perspective Sarkozy's ambitions for an EU Army - especially as the French, like the rest of their European "colleagues" seem to have trouble dipping in their pockets to fund their militaries.

In truth, the greatest threat that a European Army might present to the enemy is that they risk dying of laughter - especially when the "colleagues" get to work on our military equipment. Unfortunately, that is not a luxury those whom they purport to protect can enjoy.