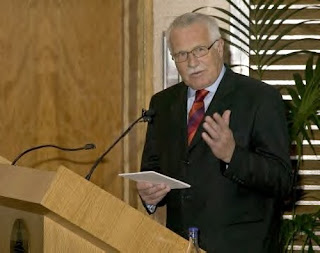 My colleague has expressed the not infrequently held view that Central European politics cannot be understood by mere mortals. I wouldn’t go as far as that. Plenty of mortals around who do understand Czech and, sometimes, even Polish or Slovenian politics. Hungarian politics is dead easy. You just have to be a little mad to grasp it.

On various occasions in the past I have tried to explain why Central European countries seem to look at matters differently from the way West Europeans do and what the main tenets of their politics might be. No doubt I shall return to the subject in the future.

In the meantime, let us have a quick look at the situation in the Czech Republic as far as the Constitutional Reform Lisbon Treaty is concerned. UPI sums up:

Czech leaders called for an end to the ratification process of the European Commission's Lisbon treaty in the wake of its rejection in an Irish referendum.

President Vaclav Klaus, the only truly principled politician in the former Soviet bloc and much disliked by his colleagues because of that, announced as a number of newspapers noted, that the Irish no vote shouold mean the end of the Treaty and of the ratification process. He will find out at next week's European Council meeting that it ain't necessarily so. Then again, Klaus is one of the very very few politicians in the world who may be stubborn enough to hold on to his position.
Czech Senate Chairman Premysl Sobotka has agreed with the President, which might mean a united front on the issue. The Senate has submitted the treaty to the Constitutional Court and its verdict is awaited.

It is not precisely true, as Radio Free Europe maintains, that “many other countries in Eastern Europe are also intensely skeptical of further political integration”. Well, they may be sceptical but they rushed to ratify the latest manifestation of that integration with quite indecent haste. Hungary was the first to ratify, as I recall. Some, I suspect, are trying to play it both ways. Yes, we are sceptical but we are also good Europeans. Now, I imagine, some are having second thoughts.

Beyond the pronouncements, the Senate, controlled by the ODS, voted in April 48 to 4 with 18 abstentions to ask the Constitutional Court to rule on whether the Constitutional Reform Lisbon Treaty is compatible with Czech law. So far the Court has not ruled but, no doubt, the Irish referendum will jog their memory.

At present, the Czechs are holding out against the pressure from the more communautaire members of the EU, led by President Sarkozy who has sped to Central Europe to meet the prime ministers of four countries in Prague.

The chorus of defiance includes Prime Minister Mirek Topolanek as well as Deputy Prime Minister Alexandr Vondra. Mr Topolanek has expressed the opinion that the ratification process has already been suspended in his country. Furthermore, he thought that the Irish vote should be respected (what a very peculiar idea!) and, in any case, it seems unlikely that the Treaty will enter into force on January 1, 2009, the date, on which, coincidentally, the Czech Republic will take over the rotating presidency.

The Visegrád countries (Hungary, Poland, Slovakia and the Czech Republic) do seem to have cracked one of the codes the EU is fond of using. They have announced that, disregarding the fact, that the Constitutional Reform Lisbon Treaty has run into some difficulty, the enlargement process must continue and Croatia must become member of the EU as soon as possible with others following her. What they did not seem to discuss is who was going to provide the money for this process that seems to resemble the perpetual motion machine.