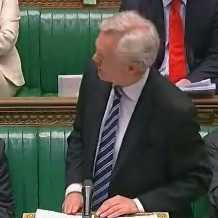 News is coming in that the shadow home secretary, David Davis, has resigned as an MP over the 42-day issue - forcing a by-election. There is rumour of a split between him and David Cameron over whether the legislation would be repealed - and also on ID cards. Dominic Grieve is his replacement.

Davis is to stand in the election on the issue of civil liberties - the "ever intrusive power of the state in our lives". The Lib-Dims are not putting a candidate up against Davis. CCHQ stated that Conservative Party resources will not be available for the by-election.

For all that the move has been hailed as "courageous", with a 5,000 majority in his seat at the last election, polling 22,792 votes against his nearest rival's 17,676 (Lib-Dim Jon Neal) – and now with the Lib-Dims not contesting - this is not much of a gamble. Davis is almost certain to be re-elected, his Labour rival last time only polling 5,116 votes.

There, incidentally, are strong rumours of another - less high profile - resignation from the Tory front benches.

Our initial response is that it is marvellously admirable that an MP is finally prepared to stand up on a point of principle. Are we to see MPs resigning over the EU and the ramming through of the constitutional Lisbon treaty without a referendum?

The great regret is that this resignation will drive EU issues even further down the news agenda.