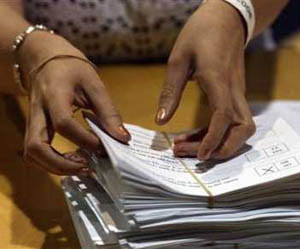 Entirely as predicted, the "colleagues" are rolling out their game plan, the first elements being charted in a piece in The Guardian this evening - with others following.

Says The Guardian, "Germany and France today moved to isolate Ireland in the European Union, scrambling for ways to resuscitate the Lisbon treaty after the Irish dealt the architects of the union's new regime a crushing defeat."

"Refusing to take Ireland's 'no' for an answer," we are told, "leading politicians in Berlin and Paris prepared for a crucial EU summit in Brussels this week by trying to ringfence the Irish, while demanding that the reform treaty be ratified by the rest of the EU."

Like most other media sources, this paper cannot seem to get its head round the idea of a European Council, but that is what it means by "summit".

Anyhow, the "Franco-German plan" – says The Guardian - is to have all 26 other EU states ratify the treaty as soon as possible to quarantine the Irish, and then come up with some legal manoeuvre enabling the treaty to go ahead. France's Europe minister, Jean-Pierre Jouyet, says that "specific means of cooperation" could be invoked to deal with Ireland.

He is backed by German foreign minister, Frank-Walter Steinmeier, who says: "We're sticking firmly to our goal of putting this treaty into effect, so the process of ratification must continue."

Here, then, are the elements of the game plan, part of which is that there is no intention whatsoever – despite speculation to the contrary - to push Ireland into a second referendum. Pulling this country into line will all be done low-key, avoiding the drama associated with an electoral contest.

Meanwhile, we get separate indications that the "colleagues" are continuing apace with their plans to implement the treaty. From Aviation Week comes news that an informal Space Council is planned at the French spaceport in Kourou, French Guiana, at the end of July – to develop the EU's space policy, brought in by the constitutional Lisbon treaty.

Throughout the next few months, there is going to be a great deal of "noise" about the Irish referendum, with endless "comment and analysis" from uninformed sources. But, as with spotting the sleight of hand as a magician pulls his ticks, the way to deal with the EU is to ignore the "drama" and the hyperventilating journos. Look for the actions of the main players.

Signalled here, loud and clear, are their intentions – the treaty will be pursued and, by the end of the year, it will be in place. Entertaining though it may have been, the Irish referendum always was and remains an irrelevance. The "colleagues" will not be denied their treaty.